It would perhaps be more accurate to state that we Necropolitans know more of the ways of the living than the inhabitants of their cities do. We know more of their funeral customs, at any rate.  And those we have forgotten are stored in the library of Letharge. Mortality can be a signal for festivity and drunkenness; for mourning and sobriety; for feasting; for fasting; for remembrance or forgetting. 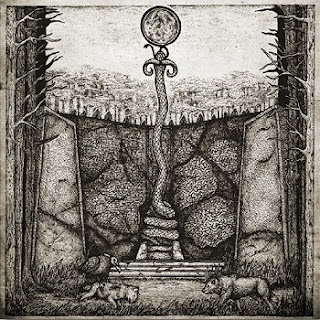 The Black Coffins
Dead Sky Sepulchre
Black Hole
Though it's spent 30 years growling about the cessation of life, death metal has rather narrowly confined itself to the mechanistic processes of death both in and out of the grave. Very few bands have mustered the wherewithal to muster more insight into what the end of life actually means. Brazilian death metal quartet The Black Coffins get a bit more philosophical with a handful of songs that consider not what death means for the corpse, but how those left behind process its ramifications and the rituals that ease the passing for survivors. They also bang out a bunch of tunes about hate and destruction and bombs and all that other stereotypical death metal folderol, but they're at their best when they think a little deeper.
So it's kind of a bummer that Dead Sky Sepulchure sounds so flat and lifeless, especially considering it was mixed and mastered by William Blackmon of Gadget who has always done a stellar job of pulling the best sound and performances out of his own band. The Black Coffins' death metal won't bowl over with originality anyone who has heard the first two The Haunted records, but that still doesn't excuse a tepid performance. Even throwing in stolen Motorhead riffs in "Below the Roots" doesn't spark that primal urge get up and rage.
I can cheer on a totally generic album that's delivered with verve and bashed out with panache, but there's just something embalmed about Dead Sky Sepulchre. It's a shame to hear an album that strives for something original lyrically be dragged down by a forgettable recording.