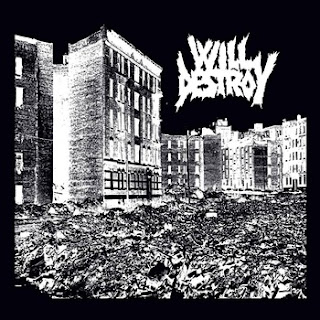 Will Destroy
Will Destroy
Bandcamp
Even on an MP3, there's a hiss and crackle between Will Destroy's songs that sounds like a record on a turntable that set the tone for this Venezuelan band. But be warned, this isn't a band for anyone who appreciates the lower registers. Their demo is mixed hot and violent, with a serrated treble edge that makes even the drums sound like the clank of broken machinery. It also swallows the pig squeal vocals. Not that that's exactly a band thing, depending on how porcine you prefer your vocals.
But there's that occasional moment-- like "Cesium 137"--where the band slows down just enough that they're not fighting the mix and it sounds like you've stuck your ear right up against their amps and you feel like you're right there in the rehearsal space with them. But those moments, unfortunately, are fleeing. Will Destroy sound like they pulled their demo together over a series of sessions in a basement studio because the sound quality varies between songs. "T.H.C." is drowning in less noise, but it's still trebly and the drums have a sharp pinging tone.
This is another EP that's not terrible, it could just use some TLC to bring out its best attributes. If Will Destroy are serious, it's time to make the jump from the basement and invest in a real recording session with professionals who can make the most of their sound.
Posted by Andrew Childers at 9:13 PM