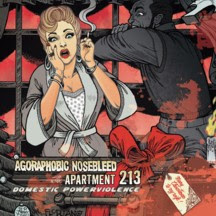 Scott Hull shreds as grindcore’s premier auteur (look no further than Pig Destroyer beast Phantom Limb released earlier this year), but fans of his scathing style will be left disappointed by Agoraphobic Nosebleed’s side of this slight split.
First off, it’s three songs in 10 minutes. Keep in mind this is the same band that crammed 100 tracks on a 3-inch CD in under 22 minutes on Altered States of America. And not one of the newest offerings is face peeling assault of digitized grind.
Built on buzzing noise and slow, rumbling bass tones, the tracks seem mired under their own bloat, lacking the bite that characterizes Hull’s best work. While “Hungry Homeless Handjob” was a needed breather in the middle of 2002’s Frozen Corpse Stuffed With Dope, it loses its punch when it gets filled out and filed in triplicate.
Though Hull’s confidently slung the sludge in Pig Destroyer, “Unusual Cruelty,” “Ejection Seat,” and “Unwelcome Remarks” feel like filler stretched too far, and the jokey domestic abuse lyrics lack the nihilistic insight that previously made ANb the grindcore CNN dispassionately documenting a world gone to shit.
While Apartment 213 frontman Steve Makita lends his rugged pipes to the Nosebleed tracks, past co-conspirators Carl Schultz and Richard Johnson, who has his hands full with Drugs of Faith these days, are palpably MIA.
Kicking off the disc, Apartment 213 ably plow through seven tracks of self-styled Cleveland power violence, including reworked versions of staples “Kill for Christ,” “Don’t Tell the Children,” “Zodiac” and “Mutilation,” but the performance lacks the punch of grit of their earlier, lo-fi hey day. While the larger budget finally gives “Kill for Christ’s” scraping lead work the space it so dearly deserves, the track as a whole just feels sluggish and enervated compared to its past incarnations.
Like basement black metal, power violence is a style that just doesn’t clean up well, and the boys seem to be lacking that violent oomph without the grit and grime beneath their nails.
Posted by Andrew Childers at 10:09 AM

Hey man...first off, love the blog.....first of its kind that I've found (and as a lone grindfreak in a quiet england town its nice to find likeminded folk....)

Arent you being a bit hard on ANb's newer stuff? I know they've moved away from the microgrind but they could hardly forge a career on rerecording altered states...

salome's terminal is a hella-fuckin-album....and maybe Katz's input is a positive thing?