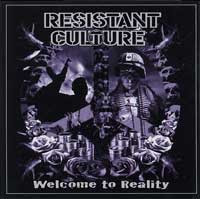 Resistant Culture
Welcome to Reality
SOS Records
Trust me and go ahead and skip to track two; you’re literally missing nothing. I don’t know what marketing genius decided to bury 30 minutes of tribal-inflected grind this good behind a half hour track of silence, but it is a real dick move.
Resistant Culture, ne Resistant Militia, has been kicking around the greater Los Angeles grind/punk underworld for the better part of two decades, but the band’s profile got a boost in 2005 when they enlisted the guitar talents of Jesse Pintado, who had recently vacated Napalm Death
And Welcome to Reality (not be confused with the EP of the same name), reissued by SOS Records almost a year after Pintado’s death, is everything the last Terrorizer record should have been.
Not to be dismissed as Terrorizer Mk. II, Resistant Culture guitarist Katina clearly has a copy of World Downfall in her collection. But the band spikes its punked out grind with squalls of guitar skronk (“Misery”), interlaced tribal chants (“The Struggle Continues” and “Silent Predator”), dollops of thrash (“Sticks and Stones” ) and the all too rare grindcore guitar solo (“Forced Conformity”).
Vocalist Anthony aka Tony Militia aka Tony Rezhawk, replace Oscar Garcia’s replacement on Darker Days Ahead and one of that album’s scant bright spots, has been a growling voice for American Indian tribal causes and that focus infuses Welcome to Reality. If your ancestors might have had something to do with selling small pox-infected blankets to Native Americans 200 years ago, he’d like to have a word with you.
Welcome to Reality may not be able to compete with Napalm Death’s hooky grind, but the guitars bite with a hunger that rival’s Pintado’s previous crew’s most recent output. Katina intertwines her buzzing, scraping riffs with Pintado’s punk blasts, topping the snappy sounding drums and distorted bass crust.
While Pintado’s presence looms large over the band, Resistant Culture carved out their own space between grind’s stultifying strictures to hammer out a distinct sound that also stands as a fitting epitaph for a grindcore stalwart.
Posted by Andrew Childers at 5:53 PM

I'm confused. This guys name is "Tony Rezhawk"? Since when do Latinos have Reservations? As a Native American I take offense to this dude thinking he is our spokesperson for Native causes. This isn't a Native band bro. This is a Latino band. What's up? You guys don't have your own causes anymore? This dudes ancestors were not harmed by small pox or blankets. So why that lame quote? He'd like to have a word with them? Well bro we'd like to have a word with you. Total fake out this whole Native gimic you guys are playing. Indian country is a small country bro. Tell us your last name.

Wow, for a so called Native to speak this way doesn't make sense to me. A true native is happy when people wake up to the state of sleep all of humanity is under. For your information Mr. "Anonymous", indian country is all over this continent. you're an ignorant fool to say only indians in reservations were victims of small pox or blankets. I'm Tongva from California, and I'll tell you that my tribe is not recognized by the federal government. We were taken into missions where we were robbed from our identity, given spanish names, and indoctrinated in judeo christian religion (by force). This anonymous guy sounds like he's got a problem with himself. Let me guess, you're in a band that sucks, right? I wish you would have the balls to put your contact information so I could contact you and school you on ndn issues. Any native saying your struggle is for you alone has to be living in the comforts of civilization. There are lots of struggles out there and not enough people to support them. Anonymous, you act just like a white man, spreading your hatred, and the worst is that you probably hate yourself the most.
Anonymous, I really doubt you're an indian cause you have no balls. It's easy to criticize behind a computer because you're right, indians, we all know each other. I would really like to know who you are. Maybe I can share a thing or two about history with you. You speak like a true goon!