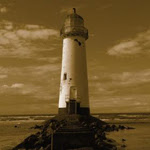 There is a moment at the end of lead off title track where the absofrickenlutely MASSIVE bass drops out, giving the chiming guitars a chance to resonate quietly before fading out. The effect is akin to drawing a deep, shuddering breath after being unwittingly suffocated for five minutes.
A lesser musician could milk a career out of an emotional moment like that, but it’s just one more restless stop on Justin Broadrick’s bloodletting musical pilgrimage. And metal’s most continually inspiring musical chameleon is clearly settling into his ambient drone skin unleashing four more tracks of weepingly beautiful shoegaze on Lifeline before fans have fully digested Conqueror.
Though largely a solo enterprise, Lifeline Broadrick does get to collaborate on “Storm Comin’ On” with ex-Swans songstress Jarboe, who careens from angelic chanteuse to screeching Faulkner matriarch and back in the space of one chorus.
Justin may want to consider jettisoning the long players once and for all because his recent EP outings have featured some of the most impressive songwriting of his already legendary career. An EP’s shorter running time forces him to trim the fat that occasionally made his full lengths patience-trying affairs.
Broadrick has left the grime and claustrophobia of the city behind and, damn, if the change hasn’t done him good. Redemptive is the only adjective I can think of to describe Broadrick’s post-Godflesh output and along with the Silver EP, Lifeline beautifully bookmarks shoegaze juggernaut Conqueror.
Posted by Andrew Childers at 7:12 PM