Metal Militia: Inside the World of Headbangers in Uniform

Behind the wheel of a giant rolling bomb in late 1990, a then 18-year-old Morgan, future vocalist for Texas grinders Kill the Client rolled across the Iraqi border as part of Operation Desert Storm to the sounds of Slayer.
“I was listening to Seasons in the Abyss when we crossed into Iraq,” he remembered, laughing.
Even driving a fuel tanker into a war zone was preferable to life in the small Texas Panhandle town that had driven a young Morgan to sign up for a stint in the Army.
“I had nothing else,” he said. “There’s nothing there unless you’re a redneck or a jock. … There’s nothing wrong with the military, especially when you’re younger and got nothing. There’s nothing wrong with giving up four years to your country. At the very minimum it’s a job that’s very hard to get fired from,” he joked.
With the exception of the armchair ubermenschen massing their armies to crush Christendom, war -- and by extension the military-- has been on metal’s shit list since Ozzy wailed his way through “War Pigs” 40 years ago.
But three centuries after British gadfly Samuel Johnson dismissed patriotism as “the last refuge of the scoundrel,” even some of the most vocal critics of the political status quo felt the need to give back to their country in uniform.

Sgt.Pete Pontikoff had retirement on his mind when signed up for his final six year stint in the California National Guard in August 2001.
“I had reenlisted and all I’m going to do these last six years is smoke cigarettes, drink coffee and get extremely fat. These are my twilight years,” the Benumb/Agenda of Swine singer said.
A month later the World Trade Center was gone and the Pentagon had a gaping hole in its side. Instead of its scheduled training in sunny Hawaii, Pontikoff‘s unit was waiting for the inevitable call up to war.
In a transportation unit at the time, Pontikoff volunteered to join an infantry group for a deployment to Iraq in 2005, much to the dismay of bandmate and brother, Paul.
“I thought I was pretty adamant about (his military service) in interviews. Yeah, this is what I want to do,” he said. “But people were surprised.”
In its formative years metal, especially grind, cribbed its politics from anarchists and peace punks, and that skepticism of anything that involves the government and the military still permeates the scene.
Benumb’s friends list in the liner notes of their albums have given shout outs to some of the most vocal opponents of military aggression. Crusty fellow Californians Capitalist Casualties succinctly summed up their thoughts on the military industrial complex with “My Dad Kills for the USA.”
His retirement papers processed this summer, Pontikoff has no regrets about his 20 years in uniform, but his military background raises eyebrows in a California scene know more for protest than patriotism.
“What people don’t understand about Iraq is it’s a multifaceted issue,” he said. “It’s a mirror of America. Personas change from neighborhood to neighborhood. It’s just not a black and white issue.”

Pontikoff’s year in the desert was largely spent supervising local crews as they tried to rebuild the country’s shattered infrastructure, from playgrounds to plumbing. But he also did his share of patrols through Baghdad.
“For my own conscience, so I could look myself in the fucking face, I made sure I did some patrols and some checkpoint time,” he said.
But the self appointed scene police took issue with Pontikoff’s military service while fronting a band that‘s collective politics trend lefty.
“There were a lot of attacks on Relapse saying it was Republican propaganda because I didn’t read Chomsky,” he said. “… Nobody said anything to me directly. You get some glances from the trendy newcomer kids. To hell with them. I’m 39.”
While Benumb’s politics had dealt primarily with issues of economic justice, the band did do the obligatory “fuck war” songs on occasion, and Pontikoff is more then willing to cop to the purported hypocrisy of it.
“There’s a lot of people that gave him a lot of crap for being in the military,” Morgan said with disgust. “A lot of these people don’t know him from Adam. He’s a real person. He’s a real guy.”
Though he’s been discharged for a decade, self described political moderate Morgan still tries to uphold the oath he swore when he enlisted -- protecting the country from “all enemies foreign and domestic.”
Especially that part about enemies domestic.
“I’m a very patriotic person,” he said. “I love this country. I hate the government. People need to learn there’s a difference.”
Though he looks back with pride on his part liberating Kuwaitis from Saddam Hussein, the guy who belts out songs like “Killing Fields” and “Commander in Thief” has concerns about the current Middle East imbroglio.
“Now we’re protecting our oil interests and taking back the poppy fields from the Afghans,” he said.

War Ensemble
Four years on, the ubiquity of the war in Iraq is forcing some bands that have historically shied away from politics to address the ongoing conflict and the men and women on the frontlines.
With a cousin who served overseas, Demon Hunter frontman Ryan Clark and the his bandmates wanted to pay tribute to the men and women in uniform with “The Soldiers Song.”
“Essentially, we just wanted to give them something to pump them up and make it clear that they were appreciated,“ Clark said. “We thought, with all of the negative energy being projected over there by popular musicians, we would do something to counter attack that. Not as a political stance for our band, but more as an encouragement for the people who were doing a hard job on our behalf.” 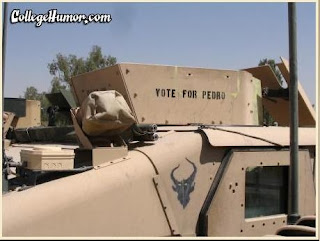 The response to the tune from soldiers has been overwhelmingly positive. The Demon Hunter logo popped up in tattoos and painted on the sides of tanks in Iraq and Afghanistan.
“They’ve been very appreciative of what we do and we do our best to show that appreciation right back for their work,” Clark said.
The metalcore quintet is not the only one getting fan mail from the war zone.
“We get a load of e-mails off servicemen who have served in the Middle East, both British (and American) forces but mainly U.S.,” explained Bolt Thrower’s affable mouthpiece Karl Willets. “It is strange to hear the tales of them playing our music whilst out on patrol.”
After two decades spent replicating the sound of panzers on the move and meditating on the meaning of battle, no one in death metal can challenge the Coventry warmasters’ crown.
But the band has shied away from current events, preferring instead to address warfare from the perspective of history, fantasy and metaphor.
“We have tried to cover the issue of war from a participant observer perspective, not moralising on the good or bad of it,” Willets said. “We specifically kept away from the politics involved, although we where influenced by the political posturing of punk bands such as Crass, Antisect, Flux of Pink Indians, Discharge etc.”
Willets may have inherited the band’s lyrical themes from predecessor Alan West, but he quickly made them his own, adding his own perspective on the clash of armies.
“I toyed with doing some lyrics about global terrorism, but they got put to one side for the last album,” he said. “… My personal view on war is that it is the failure of political argument that often leads to conflict. It is a necessary evil. I am strongly opposed to any form of fundamentalism.”
While Bolt Thrower has toyed with addressing the Global War on Terror head on, others who have served, like Pontikoff, struggle with how or if to convey their experiences musically.
Serving his time in the relative comfort and security of Baghdad’s Green Zone, Pontikoff said it would be “almost kind of phony” to write about the war with his new project, Agenda of Swine.
“Saying ‘screw the war’ is really hypocritical. Everything I did was for the buddy next to me and a clear conscience,” he said.

Realities of War
“I think that the conceptualisation of modern warfare has changed somewhat from the traditional two armies (in different colored uniforms meeting on a battlefield),” Willets mused. “The last album (Those Once Loyal, Metal Blade, 2005) worked with some of these issues. For example, ‘The Killchain’ is about technological warfare and the digital battlefield.”
Rather than the soldiers in different colored coats of yore, the latter half of the 20th Century and the first seven years of the 21st have seen large chunks of the Western world mired in increasingly protracted conflicts where the enemy and the objective are increasingly murky.
Ideology has increasingly replaced nationality as the boogie man, and the semantic wars on the home front can be just as bloody as skirmishes on the front line.
Those on the home front have not been asked to sacrifice for the war effort, but each side is eager to score political points, shouting “Support our troops,” like a mantra.
“It means different things to different people. It’s like ‘Go Cowboys.’ It’s a gymnasium thing,” Morgan said philosophically. “There’s a lot (of soldiers) that believe in what they’re doing. There’s a lot who don’t want to be there.”
No matter how many or few yellow ribbon magnets adorn the back of your car, Americans seemed to have learned some lessons in the past 30 years.
“We got better treatment than the Vietnam vets,” Pontikoff said. “I’m happy that people can be against the war and still support the troops. That’s all we ask. Any support’s good considering we’re not being spit on or called baby killers.”
If nothing else, Pontikoff and Morgan say their experiences and the current political climate are fertile breeding grounds of aggressive music.
“A Republican administration is always good for grindcore and punk rock. It gives us plenty to write about,” Morgan said with laughter.
But mulling the complexities of life in a war zone, even Democrat Pontikoff can even muster a level of sympathy for President Bush.
“In any team structure, if the coach doesn’t have the greatest people underneath him, he’s going to appear like a shitbag,” he said. “I know. I’m a Raiders fan.”
For good or ill, Pontikoff knows the war will be won and lost by the individual soldiers walking the streets of Fallujah and Baghdad.
“It’s the troops on the ground who are making the difference, and it can go both ways even with that,” Pontikoff said. “You’re also dealing with the baggage the last unit left you. How did the last unit treat people?”
But those kinds of lessons aren’t limited to war zones.
“Thinking things through, that’s where real citizens are made,” Morgan said. “People have to make a decision and stand up. The time for talking will be over. That’s when we’ll see who the real Americans are.”
Posted by Andrew Childers at 11:29 AM

This was really effing good. You should keep shopping it around to publications. It deserves a wide audience.

bravo man that was really good

I always wondered about this subject. Luke, the guy that drew our "maine is the bastard" shirt is in the army, and various past bandmates have since joined the military. Even our drummer tom was considering doing it (but he was into joining the army band).

What I've always wanted to find out is the dynamic between bands like Drowning Pool who write lyrics like "Boo yeah, this for the soldiers" and why they have any legitimacy within the military establishment, or if the bands themselves feel bad abut exploiting what is essentially a built in audience that isn't normally supported musically.