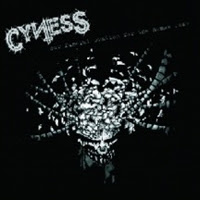 Cyness
Our Funeral Oration for the Human Race
Sound Pollution

Somebody’s roots are showing, and it’s not the mohawked guy whose silhouette graces the disc.
On their second album, Our Funeral Oration for the Human Race, these Berliners channel their hardcore heritage, and it’s that punk sense of immediacy that propels the dozen tracks.
From the “Grintro” (their term not mine) through album closer, “Children of No Revolution” Cyness harkens back to the late ‘80s when hardcore tempos blurred into blastbeat territory.
The ominous melody in “Nazi Rein’s” bridge makes that track, one of the album’s longest at an epic 2:33, a clear standout. Like a lot of European grinders, Cyness sneak in swirling, almost black metal-ish melodies in many of their songs (“Harley Horst,” “Single Nation”). But this isn’t some bit of Cradle of Filth wankery; the melodies are firmly welded to a bed of early Napalm Death worship.
Though half of the song titles are in English, to get the most out of the lyrics you’re going to need some remedial German classes. However, the band provides brief summaries of each song’s theme for the Amerikaners.
The language barrier isn’t a factor when it comes to the album’s retro Bolt Thrower artwork. The spear wielding lizard man squaring off with a cyber ninja in front of a Mad Max-ian tank needs no translation. Some things are just universal.
Posted by Andrew Childers at 7:25 PM