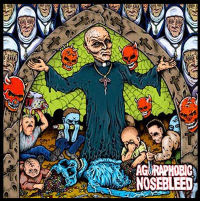 A drug addled CNN for the grindcore masses, ANb set their sights on rotting civilization and just let the cameras roll. Altered States documents disease, political strife, apocalyptic cults and underage Hispanic hookers with the same dispassion, almost documentary style.
Scott Hull grinds, thrashes and programs superhuman blastbeat beatdowns while vocal trio J. Randall, Carl Schulz (Prosthetic Cunt) and Richard Johnson (Enemy Soil, Drugs of Faith) spew their accumulated bile.
While much can be made about Nosebleed’s place at the forefront of the drum machine driven blipcore renaissance, don’t overlook Randall’s electronic meanderings as the other half of the collective’s core. After twiddling the synthesizer knobs for Bostonians Isis and Cave In, he applies his own devilish electronic flair to ANb’s crowning achievement to date.
If for no other reason, ANb deserves inclusion on the list for the absurd feat of cramming 100 tracks into less than 22 minutes, on a 3-inch CD no less, to crown the whole gonzo debacle.
If a zombified Hunter Thompson took one last meth fueled rampage through Sin City, this would be his soundtrack.
Posted by Andrew Childers at 7:22 PM

The anti-anxiety medicine xanax is wholly capable of facilitating your war against anxiety as it is the most widely recognized medication to treat anxiety disorders, especially generalized anxiety disorders and altogether Xanax can treat a whole lot of anxieties related to panic disorders and depression. Before you move on to administer Xanax and treat your anxiety, get hold of Xanax tidbits from the site http://www.pill-care.com

You made some good points there. I did a search on the topic and found most people will agree with your blog.