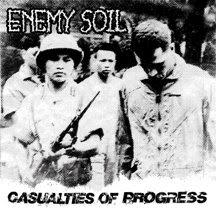 Enemy Soil
Casualties of Progress
Relapse
J. Randall knows his way around a drum machine, so when he gushes about the importance of Casualties of Progress in the reissued album’s liner notes, ya kinda take that shit seriously. ANb’s resident misanthrope mouthpiece dubs this nine track collection of groundbreaking drum machine grind from 1994 “an unsung hero, a wartime casualty, loved/known by a few.” Talk about damning with faint praise.
Relapse has finally gotten off of its collective ass to reissue Casualties of Progress, Enemy Soil’s signature EP with a handful of bonus tracks, which was absent from the Smashes the State discography on Bones Brigade.
This 15 minute collection, featuring four songs (including a Napalm Death cover) not on the original 7”, pulled together by Richard Johnson and tag team partner Mason (Initial State) is a historical revelation. Until then, drum machines had been the province of bad dance music and the occasional industrial visionary, but no one had really harnessed its blast beat potential. Enemy Soil specializes in the kind of 60 second electrostatic jabs to the ’nads “a few bad apples” delicately applied to Abu Ghraib prisoners in all of our names.
Many of these songs have been released elsewhere and collected on Smashes the State, but Casualties of Progress boasts some of the best production of the band’s short and varied career, courtesy of Relapse’s deep pockets and sonic guru Scott Hull’s deft remastering job that gives the tracks plenty of depth and clarity without sanding down the raw edges that make grind work.
Like the killer sampler that kicks off “Group Think” says, “what’s gonna happen when this war breaks out is the bombers and strangers are gonna fall into each others’ arms and say oh now we have to fall in line behind the president. What I say is this is when we gotta go in the street and shut this country.”
Though it referenced America’s first questionable military foray into the Persian Gulf, it’s just as applicable today. And so is Casualties of Progress.

[Ed.’s note: Not enough to sate your Enemy Soil fix? G&P struck up an email convo with Richard Johnson reminiscing about Casualties of Progress’ reissue. So come back this weekend to learn about the early days of drum machine grindcore from one of its earliest practioners.]
Posted by Andrew Childers at 8:22 PM

It was a great time, I think J.Randall was an important think when he made the around a drum, so the enemy soil is a great topic to study.

What a great record this is, I remember that I was looking for it a few years ago, now its back, thanks for share it.