Inarguably the greatest family tree in metal is Napalm Death, which counts Godflesh, Jesu, a million Mick Harris solo albums, Cathedral and Carcass among its progeny and cousins while intermarrying with Benediction, Extreme Noise Terror, Righteous Pigs, Terrorizer and Unseen Terror. From that initial teenage trio we’ve gotten a lineage of bold experimentation and rough hewn gutter level artistry that’s unsurpassed in metal.
Though it may not boast as varied and lauded a pedigree as its British relations, America can boast its own idiosyncratic family tree of forward thinking metallions who continue to mold masterpieces out of punk, metal and sludge.
And it was birthed in Arizona of all places. 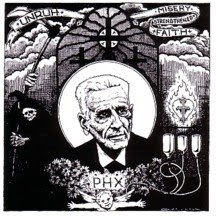 Unruh
Misery Strengthened Faith
King of the Monsters
1997
Named for a New Jersey spree killer from the 1940s, these skate punks’ unassuming debut album was the kind of hardcore and metal crossover record that you would expect to find on Prank right about this time, sharing more than a little musical headspace with Damad’s Rise and Fall.
Crust punk riffs played at grindcore speeds with an undercurrent of sludge dynamics, Unruh’s Misery Strengthened Faith built on the concussive assault shown on their earliest 7-inch, comp and split appearances, furthering refining the band’s mix of abrasive metal and atmospheric breaks and musical white space.
Guitarist Ryan Butler and the band’s ever shifting roster of bassists used their instruments like bludgeons, creating cudgels of sound while drummer Bill Fees mixed up his sheer speed with the kind of fills and deft touch unusual for a punk band.
The ominous build of “Ugly Inside” combusts with a scorched desert heat that once again dissipates, leaving a sizzling mirage in its wake while “Jab Job’s” neck-snapping grind-to-sludge transition hinted at the kind of artistry that would follow. Album closer “Fear and Loathing Among the Working Class’” no tempo guitar scrimshaw could have grace just about any Stephen O’Malley.
Lyrically, frontman Mike Edwards had a knack for stripmining blue collar unease – both religious and economic – on songs like “Fear and Loathing” and “Salt Lake of Fire and Brimstone.” The black eye sludge of “Rebirth of Family Values” stalks the album like a drunken, abusive – yet overly religious – father who takes Proverbs’ warning against sparing the rod a little too literally.
For all of Misery Strengthened Faith’s innovation, though, it was merely a taster platter for what would come next.
Posted by Andrew Childers at 6:49 PM

Yes, awesome post! Great band that hardly gets mentioned, first heard them through the Cry Now, Cry Later comps. I've been meaning to post some of their albums, very rare stuff to find on the blogosphere.

awesome thing is, unruh was just the beginning.... sort of. the stuff that came before and after was just as surprising and awesome.