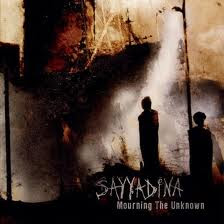 Sayyadina
Mourning the Unknown [Reissue]
Nerve Altar
We shouldn’t even be having this conversation. You know that, right? You’re smart people, so you already know Sayyadina hold the post-Nasum Swedecore crown for second album Mourning the Unknown. It’s an album you already know and love, so my work here should be done.
But on the off chance some of you are not among the converted yet [*side eye*], the nice people at Nerve Altar have pressed Mourning the Unknown on a lovely slab o’wax – with three bonus tracks.
While Nerve Altar tells me it hasn’t been remastered, some quirk of the vinyl format seems to have given Mourning the Unknown an extra pop, especially the drums that just explode off the wax. Also, the 12-inch format really highlights the album’s evocative artwork.
But likely the hook here will be the bonus tracks.
The most rounded of the trio is “Like Rhinos,” a whip snapped rip that turns poaching endangered species into a metaphor for human suffering. Unlike the other two bonus tracks, it’s easy to imagine “Like Rhinos” having been included on Mourning the Unknown originally. The remaining two songs, while decent enough, don’t stack up against a modern grind classic. “Come Visit Sometime” rides a loping riff up and down the stairs that could pass on a Victims album with no comment. “Just Like a God” is just a straight up ripper.
It’s been three years since Sayyadina gifted us with Mourning the Unknown and its status as a modern classic is being cemented every day. But if Sayyadina intend to stay at the top of the heap, they may need to hit the studio soon. Afgrund and The Arson Project are nipping at their heels.

Labels: grindcore, how swede it is, mourning the unknown, nerve altar, sayyadina

For me personally Afgrund hold the nasum crown, but Sayyadina are a close 2nd

I've yet to give Afgrund more than a cursory listen, but Say-ya-didn't is another of the growing horde of bands this blog sends me to.

I'm guessing Afgrund is probably next.

I chased down some Defeatist, was just slightly underwhelmed, but ended up with some Anodyne. I think that means your streak is intact.

Forget if you have any opinion on Splitter or not, but they're also some of my favorite Swedes. Sometimes the mix on their records is criticized, and they've got a Maruta-ish tendency towards breakdowns, but their sound has this Nasum, Discordance Axis and Pig Destoyer-in-a-blender sound that keeps me coming back to them. As for Sayyadina, I flipflop on them a lot. When 'Mourning the Unknown' came out, it was like my favorite for a solid month, but since then I've kind of strayed from them for a while. It'll take a new release to really cement their place in grind for me.

Looked back and found your 'Avsrackande Exemplar' review, but if you haven't heard the F.U.B.A.R. split, I'd recommend it.

Hey, in your Splitter review you mention that they wrote a straightedge anthem. There are an awful lot of pics of them getting the beers in on their Myspace. Some sort of inside joke?

@ ortho: afgrund could easily take if it they could put together a complete album. they're a phenomenal band that always has one or two lingering disappointments. like any time they write a sludge song. there's just no denying that shit is bad. mourning the unknown simply doesn't have a weak point. it rips front to start and honestly leaving those three bonus tracks off really makes sense in that context.

@bill: beats me. but "every week it's the same story/you await friday and spend all your hard earned money on booze (freedom)/week after week this goes on and everything ends in a hearbeat/it really defines the low value of life" doesn't exactly sound like a ringing endorsement of the jersey shore lifestyle. but it wouldn't be the first time i misread something.
as for defeatest, i love them musically but wish to hell they'd get an additional singer. something to break up the monotony. it's funny you mention them cuz aaron nichols is the guy behind nerve altar (thanks for the records aaron).
as for anodyne, they shit on everybody's favorite band. i don't care who your favorite band is. they were that good. lifetime of gray skies is the most abrasive thing i've ever heard sonically or emotionally.

@dessicated: i thought i'd feel the same way cuz i go long stretches without listening to it. but every time i pick it up it floors me. it's the most comprehensive swedish album since helvete.

Well, there's a difference between getting some beers in and having a good time and spending throwing all your money and your life away, right?

And yeah, it was the vocals that held Defeatist back. They're solid, but too one-note. "Lifetime..." is in the mail. I are excite.

Also, anyone have a tip on where I can find Splitter's full-length in CD format? Relapse is out, Interpunk only has the vinyl.

selfmadegod looks like they have it in stock. i order there pretty much exclusively these days. even from poland, a pay pal order is on your door in a matter of two weeks.

@Andrew Childers
Agreed, but for me Svarta Dagar trumps Sayyadina.

bill you could be right on the lyrics. not the first time i've ever been wrong.

ortho: i think afrgund have a hell of a lot of potential. probably one of the most exciting bands working right now. i'm just waiting for them to hand me a complete album with no filler. i think it's in them. it could be their lineup instability over the years.

Y'all might be leaving out Infanticide's recent in this parade of Swede grind terror. Any room here for Ambassador Gun from Minnesota as a ringer for the Swede grind sweepstakes as part of the Nasum worship/Scandinavian sound-a-likes in a blind taste test?

i thought infanticide was cool but sort of forgettable.

in other news, HOW DARE YOU ALL DISAGREE WITH ME? who gave you permissions to have justifiable, well argued opinions of your own?

Perhaps you have educated us so well in Grind, that collectively (not at the level of the individual yet) we can now attack your statements and defend our own, without raining down a shitstorm from your own vast knowledge of the genre.

The students are now the master, Andrew-san.

And we have Google and shit.

I can't weigh in on this one just yet. I've got Sayyadina's album and the comp of their split/EP stuff. Nothing by the other bands, though.

Afgrund's last LP and that Splitter album (via SMG, thanks for the tip) are on their way to my doorstep.

I suppose, at some point, The Arson Project will get some playing time despite their name.

Once all this happens, the truth will be known about new-school IKEAcore supremacy.

Actually, my VERY favorite Swedes are unquestionably Arsedestroyer. If you haven't listened to 'Teenass Revolt,' you should definitely at least give it a try. It's like early Discordance Axis played through broken speakers in a old car tapedeck, with weird Swedish vocal samples edited onto it.

The last time I listened to a band of Swedish Discordance acolytes, it was Asterisk*, and they slayed.

So, I will look into this Arsedestroyer, fo sho.

i've never bothered with arsedestroyer either. i'll be hitting that too based on that recommendation.

bill, the arson project remind me a tad of graf orlock in their riffs and some of their phrasings. i think they're one of the more interesting and unheralded of the swedish bands.

Well, Aresdestroyer won't remind you of DA the same way Asterisk* do, that's for sure; they're crustier, and forego most of the mathy elements for straight evisceration. Glorious, though; you should be warned that 'Teenass Revolt' has no song titles, however, so be prepared for some Track 1, Track 2, etc. action.

Ditto on the Arson Project being sweet, but I've never heard Graf Orlock in them, for some reason. I've actually never could get into Graf, personally; they've always sounded much more like a breakdowny hardcore band than a grind band to me, and while I've always tried to be convinced otherwise, it hasn't worked yet.
-Nigel

And what about Gadget? Funeral March was awesome - and I know G/P is not the biggest Phobia fan, but the recent Gadget/Phobia split hits on all cylinders. Top class.

anon: i've been meaning to pick that split up for a while and just haven't gotten around to it yet. gadget is a great band that i've always felt was lacking a touch of spontaneity that sayyadina have. i think it may be a quirk of the production.

recent phobia hasn't been my thing, but the new tracks they've posted for their next album are just awesomely chaotic. i may be won over.

Just listened to their Myspace tracks. Seems good, but not outstanding. Needless to say I'll have to download it an give it a whirl. THis is how I felt about Insect Warfare, but then I become quite the fan boy.

I will say, with the whole Swede thing, the production alone makes me like them more than Afgrund (Vid Helvetets Grindar is excellent but way too clean sounding).