Blast(beat) from the Past: Aztec Two Step 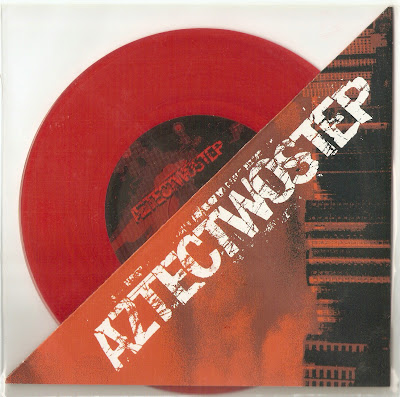 The most remarkable part of Swedish hardcore band Aztec Two Step’s punk assault is how little they sound like a Swedish hardcore band. This is Swedish hardcore that doesn’t beat a d. I think I think my feelings on Swedish punk are pretty clear, but Aztec Two Step are a refreshing change from a nation that seemingly issues its citizens the Discharge box set with their birth certificate. Named for a line in a Lawrence Ferlinghetti poem and not to be with a pair of folk rock choades who were last seen swinging from Simon and Garfunkle’s cock, this Aztec Two Step are all machine shop guitars and sheet metal spark vocal thrashings on jaunty red vinyl no less.

“The Death of…,” which kicks off the Fear and Loathing in Las Vegas-sampling B side, is a masterpiece of farting bass and needle sharp guitars, everything a good hardcore song should be. “Blackmetal,” which pisses all over the early years of Mayhem, vies with Population Reduction’s “Black Metal Beach Party” for the most hilarious takedown of the panda power set ever lashed to a punk beat. And while Aztec Two Step may rage against people who watch too much television, I have to give them a slow golf clap for a song encouraging kids to watch Sesame Street “Bert and Ernie.” Throw in Minor Threat and Mob 47 covers (“Out of Step” and “Dom Ljuger,” respectively) and you’ve got yourself a tidy little 10 minutes or so of balls out punk goodness.

Posted by Andrew Childers at 7:17 PM

Labels: aztec two step, blastbeat from the past, hardcore, how swede it is, immigrant sun