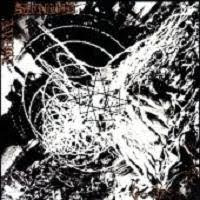 Wanda: Oh, right! To call you stupid would be an insult to stupid people! I've known sheep that could outwit you. I've worn dresses with higher IQs. But you think you're an intellectual, don't you, ape?
Otto: Apes don't read philosophy.
Wanda: Yes they do, Otto. They just don't understand it.

Where else other than black metal would you find a swath of humanity that simultaneously claims to possess the sole true embodiment of Nietzche’s will to power, triumphing over the slave morality of conformist society, while loudly decrying any other of the armchair ubermenschen with the temerity to flaunt their ever so rigid rules?

On the rare occasions I’ve looking for something blackened, a couple spins of Hellhammer or reservations at Acadiana are generally enough to set me straight. So Infernal Stronghold’s second long player (vinyl!) of blackened crust charred flesh is not the kind of thing I would have picked for myself. Infernal Stronghold’s second full length is a freezer burnt batch of horror punk with wall of ice vocal screeches that sound like they were recorded a county over from the rest of the band. It’s a distillation and celebration of the crusty Amebix punk grime that soots the inner linings of black metal’s soul. The

Everything on the Christ-punching Godless Noise (check out songs like “Crashing Trucks into Churches” and “Fuck ‘Thou Shalt Culture’”) chugs along at the speed of Satan with heaps of malevolent feedback shearing at the double picked guitars distant drums and howled vocals, but Philadelphians sport no corpse paint and wear nary a spiked bracelet in band photos. In fact, their bedhair and ragged shirts would pass unremarked if they were your run of the mill Assuck cover band.

Infernal Stronghold’s one nod to being kvlt seems to be their unwillingness to label side A and B on their LP, so I have no clue which song is which. That said, there’s a Conan-core tinged riff during a slow song in the middle of one of the sides that Crom would sell their autographed Robert E. Howard originals to have written. Fenriz probably approves, but there’s enough of that squatter soul to Godless Noise that even an unrepentant black metal mocker such as myself actually had the urge to throw the goat and go running shirtless through the forest on a moonlit night.

[Full Disclosure: Forcefield kindly provided me with a copy.]

Posted by Andrew Childers at 9:47 PM

the sides are listed if you look at the matrix etching. I really hate to say this, but you haven't heard this album until you hear it on vinyl. I have both the cd and the LP, heard the tracks before they were mastered, heard the cd first, then got the LP. The cd doesn't do it justice.

i guess i wasn't looking close enough then. i haven't heard the cd version but it's a damn good album on vinyl.

Did you listen to Krallice yet Mr. Childers? I swear the price of their LP is worth it.