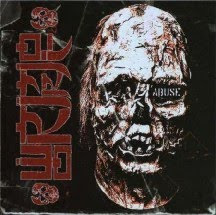 Wormrot
Abuse
Scrotum Jus
Ignore the moldering moniker and Fulci-approved artwork, the only graves Wormrot seem intent on defiling are those housing dead political ideologies. Despite an amusing disparity between songs cataloguing the band’s hatreds and others calling for the world to come together in peace, Abuse is a Singapore slingshot of barbaric grind in the vein of Insect Warfare. And one that just might be better than World Extermination? (Did I say that out loud or did I just think that?) At least the scab-raw production is, anyway.
“Freedom to Act” jumps like a frog with a firecracker shoved up its cloaca, and “Fuck…I’m Drunk” boasts an involved, scuttering riff that belies the deliberate stupidity of the title. “Murder” fractures an Iron Maiden gallop over a 324 blast. And how many other bands would have the balls to Ginsu indie rock ingénue The Yeah Yeah Yeah’s “Rich” – boasting some of Abuse’s tightest blasts, to boot – on their debut fucking album.
The only word for Abuse is precision. It's a fractal infinity of craftsmanship that demands repeated, attentive listens. When’s the last time you said that about a grind album? Jon Chang bitch screams war with toilet busting turd grunts, trading off just before either manages to push a song into boredom and banality. There’s a precision involved that almost gets lost in just how familiar Abuse is, even at the first listen. You can anticipate the vocal changeups and Rasyid’s whiplash guitar stops and rubber ripping peel out assaults. And I could write a dissertation on Fitri’s astonishingly tight, stuttered drums on “One Round Away.”
With the end of the year rapidly upon us, I had been sifting through the year’s offerings. It’s been a year of good grind but I had not found an obvious front runner like in 2008. Until now?
Posted by Andrew Childers at 6:37 PM

when you said this one might be better than world extermination i knew i had to check it out (well that and the badass album cover). this fucker is win. you sure they aint from texas?

forreal. i didn't say it was better than world extermination lightly. this fucker rules times 10.

Definitely similar in style to IW. Baybe it's just me but I hear a lot of Nasum in Wormrot. It's mostly in the vocals and the mid-tempo riffs, like the outro to Freedom To Act.

yeah i could hear a bit of that. freedom to act actually reminds me mostly of plf and that thrash/grind hybrid they play.
whatever it is, it's killer, killer stuff.

Drums are tighter, have more punch, and gallop than the IW drummer, even though I could not wait to score "World Extermination" when it was released, as well as scoop up anything else they released. How did you get this copy? Is the band's label solid or did you mail order for it?

Throw me into the "you said it was better than 'World Extermination' holy shit holy shit" crowd.

Checked out their Myspace samples, ordered the cd.

I really dig their logo, as well. Bathtub Shitter-esque.

Fuck you for making me throw away more of my money!

The label is very solid. You can trus' Scrotum Jus.

hey scott, i got my copy (along with the new attack of the mad axeman--coming friday) via relapse.

and is it just me, or is scrotum jus very quickly, very quietly becoming a must buy kinda label?

I hate to say it, but it is better than W.E. and i love that damn album. Tons of awesome,memorable riffs.

Superthanks. Some info regarding #12 on the "Dirty (Baker's) Dozen will be coming to you shortly.

is there some news from assuckland that's escaped me? i'm all a-tingle.

Got my CD in the mail yesterday and have spun it quite a few times now.

You were spot-on in your review, and this shit rips. I know there's just, you know, half of the world between them, but I think a show involving these guys and IW would probably cause unprecedented earjaculation.

Maybe they could do a split.

i am so stealing earjaculation, btw.

and wormrot is sposed to have a split with i abhor coming sooon on bullshit propaganda records. the label folks tell me i abhor can hold their own against wormrot.

Finally picked this up based on your recommendation. Completely fucking sick. Unbelievable. Thanks, as always, for filling in my weak knowledge of grind.

it can't be too weak now that you'll be able to claim you were totally into wormrot before relapse (inevitably, i'm sure) pick them up and they go all commercial.

apparently they have new song in their myspace. talkshit holocaust. its grind so much. im from singapore same country as them and they rule. one of the best acts in grindcore for a very long time in my honest opinion,

what a wonderful review about this, I love the way in which your present all the news and upgrades about this theme, in this case you show something really interesting.