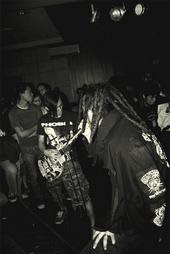 The single best grindcore record of 2009 almost never happened because Wormrot were unsure it was a strong enough debut. Let that thought sink in for a minute and weep for every other basement band that ever farted out a dozen songs over a weekend and called it an album.
“Abuse was meant to be a 12 songs / less than 15 minutes release, but it felt too short and didn’t really have the punch of a full album after reviewing it ourselves for a few days,” guitarist Rasyid said via email. “It was missing the satisfaction of listening to a complete album in one sitting. At the same time it is a grindcore album so it’s not going to be not too long or short. In fact, we didn’t even want to release it as our debut album in the first place. But we decided to throw everything we've got into this, and with the help of Scrotum Jus Records, which is clearly an awesome label just by looking at its bands roster, we just sat, watched and see if anybody bites. Some listeners got sentimental and were quick to point out and say 'Dude, that sounds like an Iron Maiden riff!' or more commonly 'I’ve heard this riff before, but where...?' It’s nice to see a reaction, even if it’s bad.”
I’ve read probably a good half dozen reviews for Abuse, and through it all, never was heard a discouraging word so Wormrot need not worry about bad press. That’s because a hitherto unknown trio from Singapore just set grindcore on its collective ass by boring down into the sound’s bedrock traditions to extract the gem at its core. Abuse is a charnel ground of ripping traditional grindcore that’s too self contained to bother with the vagaries of fashion or taste.

“Arif grew up from brutal death and grindcore, Fit was into black metal/punk and currently deathcore, and I was into mainstream Relapse/Hydrahead releases, grunge, some grindcore, a little indie and now, the radio with the likes of Paramore and Lady Gaga, and don't you dare think I'm kidding,” Rasyid said.
[Ed’s note: They fucking ripped out a totally believable Yeah Yeah Yeahs cover a la grindcore so I have no doubt he’s a serious as a heart attack.]
“From these diverse backgrounds, we incorporate and play around with the ideas and materials we have. I’m not ashamed to put a Black Sabbath hook riff, nor would Fit second-guess slipping in a screamo drum pattern. It’s about playability and variety under a disguise called grindcore. We're not really punks or metalheads. We're just a bunch of unprofessional musicians playing things we like in the vein of grindcore and it just happens that some people, like you, like our stuff.”
For an album so cohesive and focused, Rasyid said Wormrot did not have a playbook ready when they sat down to write and record Abuse so all the nods to all of grind’s various incarnations were organic outgrows of the band’s various interests.
“We planned nothing. Like you said, it evolved through time. For example; the goregrind element in ‘Fuck... I'm Drunk’ and ‘Fix Your Broken Mind’ didn’t really come in until the second half of the writing process when we're all listening to Jig-Ai's Katana Orgy at that point of time. Or for ‘Scum Infestation’ when Fitri and I were discussing and listening to Slipknot's ‘Heretic Anthem.’ The politics and humor go hand in hand. We didn’t really give a fuck about boring politics in the first place. So we thought we'd poke some fun on politics. or bands which write songs about politics.”
And after ruling 2009, Wormrot have also set their sights on conquering 2010 with a busy slate of split releases and – prepare to squeal like a school girl – a second album.
“We just completed recording for the split with Joe Pesci, which you can listen to a couple of tracks on MySpace. We're in the process of writing materials for the split with I Abhor from the US. After that would be an arduous process of writing for the second album which we're hoping to release at the end of 2010. We're saving up cash for another month long tour to support its release. Money is a killer but we need it.”
All hail the Conqueror Worm.
“We're like one of your typical MySpace success stories you read on teenage magazines. Ha ha!” Rasyid said.
Posted by Andrew Childers at 8:51 AM

pretty crazy with the whole not thinking it was strong enough... wish i could get my hands on a vinyl copy fucking hate buying cds

Yeah, they just one-uppoed IW with an album they thought was weak?!?

If they ever release something they feel confident in, we're all in huge fucking trouble.

Also, it's nice to see they have a sense of humor. Seem like good people!

i just got an awesome tidbit from the band. too bad i've been sworn to secrecy for the time being. i'm negotiating with them to post it as soon as i can.

All hail the conqueror worm!
TVG released this on vinyl, find your copy today.
Even though I was late getting into these guys, I'm glad I did. I can't wait to buy their splits.

I celebrated the first morning of the new year yesterday by brewing up a massive pot of coffee and banging my head to Abuse.
Many thanks for the further insight into this album.
Is there any possibility in the universe that this month long tour would include the USA? Cause you know, Wormrot can totally stay at my house, borrow my car and drink all the beer in my fridge if they come around.

I hope they don't burn themselves out getting all these songs written. That's quite a load for one year.