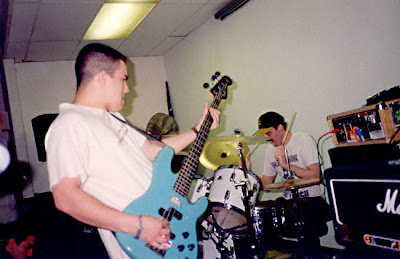 Contra what track 15 of album 222 may have led you to believe, you have not seen Black Army Jacket completely. But a lucky few of you may get the chance because the New York power violence/grindcore dervishes have decided to temporarily rescind their pre-millennial break up and reunite to play a pair of shows in August and September.
The band is slotted for August 19 at the 9th annual Best Friends Day festival in Richmond, Va., with a home town stop at the Cake Shop in New York City on September 4 to follow.
However, the shows will be more of a victory lap for Black Army Jacket. Don’t expect them to be an ongoing concern again, bassist Carlos Ramirez and drummer Dave Witte said.
“We decided to reunite now because the scheduling worked out,” Ramirez. “It's not ideal for me because my job is busy in the summer, but we are making it work. With Dave always being on tour with Municipal Waste, it's tough.”
Just getting the constituent parts in the same room again – Ramirez is in Los Angeles, Witte in Virginia – to rehearse with singer Rob Lawi and guitarist Andrew Orlando has been enough of a challenge they said, particularly when you consider international trade treaties stipulate that any new punk or metal band has to feature Witte for at least a week (or should he not be available, Bryan Fajardo). (It’s true. Look it up.)
However, after meeting up at a recent label party, the band decided to give it one more limited go.
“I think the getting together was originally inspired by the Chainsaw Safety Records 10th anniversary, to play that for good times (which never happened due to everyone's schedules),” Witte said. “I think it got everyone excited to play songs again and here we are now. There's no other motive, to get back together and write songs or tour or anything like that. The Best Friends Day fest in Richmond is a really good time and seemed like fun to do. Tony [Foresta, Municipal Waste] lured us into it, cause he's an old fan. The NY show is simply for the home turf and old friends, where the band was from.”
Black Army Jacket had the ill-starred luck to be the right band on the wrong coast at the right time during the ’90s. The musical fish out of the water played a power violent brew of grind and hardcore on the East Coast at a time when everyone’s attention had gone west, young man, drawn by the allure of Man is the Bastard and Capitalist Casualties.
“We definitely had more in common with the West Coast bands at that time,” Ramirez said. “Our guitarist had that label, Reservoir Records, so he was involved with a lot of those bands. He put out stuff by Spazz, Noothgrush, and stuff like that. So it was natural that we would connect with those kinds of groups early on. We also toured out on the West Coast more. I came from a d 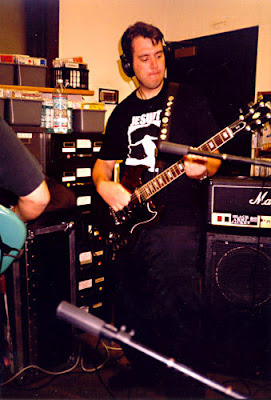 eath metal/thrash kind of thing, so these bands people were calling powerviolence were pretty much new to me. Outside of the mighty Assuck, who were from Florida anyway, I didn't know about bands like Infest and Crossed Out, before the Black Army Jacket started.”
However, the band suffered through a “weird break up” with Lawi, sending Black Army Jacket tits up in 1999, Ramirez said. A decade on and those issues have been resolved long enough to write the band’s epitaph in style.
“It feels good to get back with Lawi and do these reunion shows,” Ramirez said. “Throughout the years since we broke up the band, I've heard from younger people who never saw the band live. So hopefully some quality video footage gets recorded during the 2 shows, since we won't be able to do a full length tour.”
While you shouldn’t hold your breath on new Black Army Jacket material, Ramirez did hint a spiritual successor to Hope Collapse – the completely slept on post-Jacket grind concern he got up with Witte, Orlando and Pete Ciccotto – could be in the offing if the grindcore stars align (though most likely sans Witte, sadly).
“Andrew and I wanted to do another EP, but Witte got so busy with all of his other projects,” Ramirez said. “In the last year, I've been talking with Andrew about doing another project. He's been writing at home, and I have a lot of lyrics in the can. We want to do something in the vein of Assuck and Terrorizer. It would be great to see that happen. If any drummers out there are interested, let me know!”
Posted by Andrew Childers at 6:37 PM

Cake Show line up will be interesting.

more informative than wikipedia and with a biting wit (witte?)! you definitely publish some of the more interesting interviews out there. keep up the op-ed pieces.

I grabbed their discog CD (well, in digital format) from Amazon. Will spin it tonight while I work out to ensure total brotastic results.

You've yet to steer me wrong, Mr. Childers.

oh but when that day comes, the hell that will be unleashed.

the discog is good, but like most collections, too long and bit too uneven. i really love 222 though (featuring a rare vocal performance by witte!)

I'm almost all the way through it and I dig it so far. So far it's a great soundtrack to gin and pushups.

I also found a physical copy of the Hope Collapse EP pretty cheap and ordered that.

And no hell will break loose if you ever turn me on to a stinker. You'd have to fuck up many times to get into the red at this rate, haha.

oh man, i fucking love hope collapse. i put "cold steel penetrates your flesh" on the comp i did for invisible oranges if you need immediate gratification.

i don't know why that band never made bigger waves given the cast.