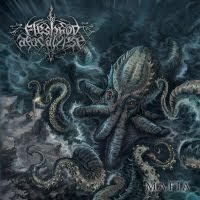 Fleshgod Apocalypse
Mafia
Willowtip
Classically-attuned Italian death metallers Fleshgod Apocalypse seem to be pulling an anti-Coppolla with their releases. If you’ll indulge the strained simile, the band pooped out their Godfather III last year with debut album Oracles, which never managed to fully integrate their neo-classical compositions into the mix, leaving their death metal to override their overtures in a way that served neither. But, having failed that miserably in service of a noble idea, Fleshgod Apocalypse had nowhere to go but up, and fuck me if five-song EP Mafia isn’t an absolute stunner.
Now rather than tacking some string arrangement or bit of piano frippery on to the end of the song, Fleshgod Apocalypse have folded the two together seamlessly, forging an alloy with the tensile strength of death metal and the suppleness of their Baroque forebears. For only 20 minutes, Mafia is absolutely operatic in scope, befitting its mob-inspired themes.
“Thru Our Scars” and “Conspiracy of Silence” are both protein-laden hunks of death metal that give way to intricately knitted strings of notes ripped and jolted from a harpsichord. The gut busting grunts are also augmented with the introduction of a Messiah Marcolin-to-King Diamond wail that brings just one more finely honed layer to the proceedings (and I’m someone who can’t normally stand King Diamond).

Fleshgod Apocalypse – “Thru Our Scars”

A faithful but no less devastating version of At the Gates’ “Blinded by Fear’s” majestic melodic flourishes also perfectly complements the sweeping vistas of Fleshgod’s vision. Bringing the mob-theme home at the end, the band closes with the piano instrumental title track which sounds like something Tessio would be pounding out on an out of tune piano as the Corleone men hit the mattresses for a prolonged gang war.
Fleshgod Apocalypse are smart, Michael. They’re not dumb like I previously said.