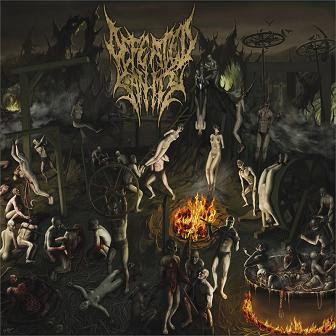 Then suddenly I saw it. With only a slight churning to mark its rise to the surface, the thing slid into view above the dark waters. Vast, Polyphemus-like, and loathsome, it darted like a stupendous monster of nightmares to the monolith, about which it flung its gigantic scaly arms, the while it bowed its hideous head and gave vent to certain measured sounds. I think I went mad then.
H.P. Lovecraft
“Dagon”
1917

Chapters of Repugnance certainly left me at the frayed ends of my sanity, but probably not for the reasons these German death dealers intended. Rather, because ohyourfuckinggod is their third album and Willowtip debut tedious. I tried to groove to Defeated Sanity’s skittering, busy technical breed of death metal but the unrelieved tempos and clanking machinery songwriting become grating, even for an album that’s only half an hour long.
From first note to last, Defeated Sanity, who clearly know their way around their instruments, hulk along at an almost unchanging midtempo driven by maddening teletype double bass and the bowel loosening grunts of a man waking from an all night Taco Bell binge. “Engulfed in Excruciation” sums up the experience pretty well because repeated listens to Chapters of Repugnance’s Dying Fetus-style tedium became a chore I absolutely dreaded.
But there were bright spots, fleeting as they were. “Salacious Infinity” casts a meager life saver for being moderately faster than the rest of the album. “Blissfully Exsanguinated” hints at what Chapters of Repugnance could have been as it cowboys a crushing bass groove that makes the whole song just feel larger and more menacing than the remaining death metal paint by numbers rehash.

Had the rest of the album been that brutish and ugly, Defeated Sanity might well have delivered an album worthy of the Bosch-esque grotesquery of the cover. Instead, I’m left to corral the shattered shards of my once (relatively) stable psyche after subjecting it to repeated lashes from this wholly unnecessary exercise. The Old Ones have never been more merciless.

[Full disclosure: Willowtip sent me a review copy.]
Posted by Andrew Childers at 7:42 AM

I love the album art, shame the music was not en par with its album art. However sadly I have ordered it already just on the strength of the album art, oh well. In future I will wait for your review before purchasing