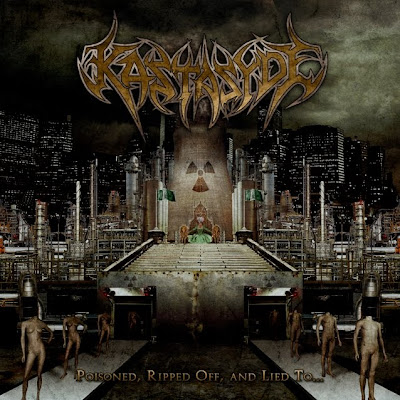 Kastasyde
Poisoned, Ripped Off and Lied To…
Self Released
As far as the plague of recent retro thrash goes, Chicago’s Kastasyde aren’t the most original or even memorable, at least musically. They also boast some of the most flagrant abuse of the letter K since Kataklysm (seriously, that name. ugh.). But fuck if I haven’t had the vocal hooks to some of these songs rattling around my noggin for a couple weeks now. And it’s those vocals that really lift up this otherwise acceptable but somewhat forgettable six song time capsule of white sneakered thrash. The vocals range from a Lamb of God-style subterranean croak to Alice in Chains’ patented FX-slathered croon. It’s those clean vocals that really drive Kastasyde’s best work. The soaring hook to “Despotical” would be an exceptional example of their vocal brain virus in action.

The alchemical churn of “As Above, So Below” is an honest-to-Chuck Billy thrash power ballad like Testament used to churn out (“Return to Serenity,” I’m nostalgically thinking of you). “Divine Evil” makes me giggle with apostate delight because the song’s acoustic center perfectly mimes the tempo and themes of those horrid modern Christian songs the preacher would belt out back when my parents forced me to suffer through church.
Do you really need another band of kids who were rocking Pampers rather than denim vests when thrash was king? Probably not, but if that’s your thing, Kastasyde unabashedly delve into a side of thrash I haven’t yet heard exhumed and overdone.
[Full disclosure: Kastasyde provided me with a download.]
Posted by Andrew Childers at 1:45 PM

No despair? No palpable disgust? No blast beats? Good production? Was that a touch of melody? Am I at the right place?