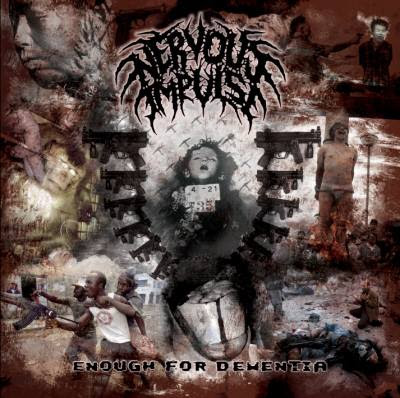 Nervous Impulse
Enough for Dementia
Self Released
Not as strong as Exitium but definitely more palatable than the most recent (bowel) movements by Misery Index, Canadians Nervous Impulse man the barricades of the same blastbeaten death chunk, an end to end rush of typewriter drumming, trebly guitar and occasionally MIA bass.
While the seething screech and impacted colon mic passing of “Lowlife Jackass” offers nothing new, “The Bells of Immorality” does surprise when it busts out a riff about halfway through that easily could have graced one of Iron Maiden’s mid-era B-sides. But for those who prefer their metal more fartsy and less artsy, penultimate banger “Blood on the Dance Floor” is a head-snapping rap to the tympanum that’s more focused and concise that some of the other occasionally overlong songs.

I do need to pause for a quick moment to call bullshit on the song “Rockstar Faggotry.” Enough with the lazy fucking homophobia already. Jesus, at least show some creativity in your insults. I’m just sayin’ “lulz ur ghey” has been done to death on the finer middle school playgrounds of the world. Branch out; the English language has a lot to offer in the way of a good ad hominem barb because otherwise the song is a nice parfait of caffeinated energy, pick squeals and microblasting middle passages.
If you can roll your eyes and ignore that and if deathy grindy is your thing, Nervous Impulse is an otherwise passable addition. If nothing else, let me help you out in the insult department for your next album. You’re welcome.

[Full disclosure: the band sent me a download.]
Posted by Andrew Childers at 6:32 PM

I've never been much for the Misery Index-style, monolith-dragging deathgrind, and that song title isn't helping their cause any.

I have to step up and openly say that I love Misery Index even their most recent stuff, however each to their own.

I like Misery Index also, but it's not worth checking out another band that sounds like them.

I had gotten bored with MI until their most recent one.

I miss the sound they had early on, when the hardcore and grind influences were still there, but I dig the fuck out of the last record, regardless.

I think the fact that all the comments are about MI is a good review of this mehtal.

ok bill it took me two days to realize mehtal was not a typo and now i'm uncontrollably giggling in my cube. if i get fired, i'm moving on to your couch.

Well, I don't have a couch. But, I have two recliners. If you push them together it works. I'll even leave the living room A/C unit on for you at night, since it's hot as fuck.

This article led me to read up on Exitium, which led to "Outsourcing Morality" landing in my mailbox this morning.

All the metal guitar craziness over the grind backbone! Hooray!

i do really enjoy the hell out of exitium. if you go read the comments on the exitium post, the guy from kill the client who produced it (forgetting name, too lazy to look) said it was actually meant to be a demo. hell of a friggen demo.

Yeah, I read that! Fucking incredible.

And your streak is intact, my man.

if i make it to 100 straight without a stinker do i get a ginzu knife set or something?