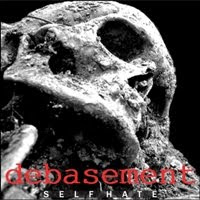 Selfhate
Debasement
Self released (distributed through Selfmadegod)
The totally unexpected news that seminal Polish grinders Selfhate had reconvened to drop their first passel of new music in a decade made me do my happy dance all through the house.
Yes, I have a happy dance. No, you can’t see it.
Given the improvement in low budget recording options in the last several years, Debasement sounds way more polished and clear than older works like …At the Beginning God Created Fear, which was mired in the scooped out sound of the late ’90s that tended to flatten out recordings.
The band is still in fine playing form even if the blasts aren’t always as fluid as they were when they were young and spry, giving songs a somewhat herky-jerky vibe on occasion. Selfhate still know their way around an engaging tune, though. In fact, that facet has only improved in their absence. The songs on the whole are more grounded and carry more emotional weight than declamations against faceless authority from past releases. That all comes to a head in closer “Dajesz Zycle/You Give Life,” which takes a subject that’s far too often trivialized in metal – child murder – and turns it into an emotional gut punch as they ponder the genuine horror of a recent account in Poland.

And while there are the expected songs about “greed” and politician’s “empty words,” I wish more grind bands would actually take the time to step out of the abstract and find an emotional center for their songs the way Selfhate has. In their original incarnation, Selfhate’s punk blast work ethic ran counter to the metal-inflected flavor of Eastern European grind at the time and I’d wager is directly responsible for younglings like Suffering Mind. Looks like they’ve still got something to teach the next generation.
Posted by Andrew Childers at 8:44 PM

I am yet to hear any selfhate, but since I am in Poland I intend to pick as much as I can up along with Rzeznia, Squash Bowels and any other Polish Grind. On a different note, if your happy dance is anything like my former dogs happy dance then I certainly wish to see it

rzeznia is not bad. not spectacular, but a decent listen when you're in the right mood. there's certainly nothing mathematic about their grind, regardless of the album title. i'd also highly recommend exit wounds if you're looking for polish grind. and suffering mind goes without saying.

As far as Polish grind goes I really dig S.A.T.A.N. but I guess they have leanings towards punk and thrash too which is a-ok with me.