Punk as Fuck: Subhumans (No, not that Subhumans) 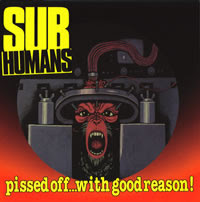 Subhumans
Pissed Off…With Good Reason
Essential Noise/Virgin
1996
You know that line from the Dead Kennedys' song “Where Do Ya Draw the Line?,” the one that goes “In Toronto someone blew up/A cruise missile warhead plant/10 slightly hurt, 4 million dollars damage.” That “someone” included Gerry Hannah, bassist for Vancouver punks the Subhumans. Whether you consider what he did a laudable bit of direct action in defense of humanity and the environment or a petulant act of terrorism deserving of the five years he spent in prison, there was no denying where the Subhumans stood.
They were a critical, if often overlooked, transitional fossil in the development of ’80s style hardcore, whipping up a batch of classic punk/proto-hardcore somewhere between the Dicks and D.O.A. (Joe “Shithead” Keithley was a member of pre-Subhumans band the Skulls and singer Brian Goble later joined D.O.A. on bass). Pissed Off…With Good Reason, a best of sampler platter, makes the perfect gateway drug for the Subhumans.
Like their eponymous English cousins, the Vancouver band stood at the fulcrum between ’70s style punk, epitomized by the Sex Pistols and Damned, and the emerging, more aggressive hardcore scene. Their songs blended furious attack, scathing humor and vestiges of hummable melodies on songs like “Firing Squad.”

No one was exempted from their lyrical brutality, not their homeland (“Oh Canaduh”), their southern neighbors (“American Commits Suicide”) or the oversexed teenage male haunting the seedier discos of the day (“Slave to My Dick”). But the secret sauce to their Big Mac was their ability to write ear worms. No matter how pissed off they may have been, the Subhumans knew their way around a hummable hook. And while I loves me some ’80s hardcore, the art of the catchy song was something that had been sacrificed along the way in the name of harder, faster, louder. Just not by the Subhumans.

You nailed it—The Subhumans were great songwriters. I believe every member contributed songs.

Look out for the Vancouver punk documentary Bloodied But Unbowed. It should be out on DVD in the near future, and has some great Subhumans footage.

Fuck, I just realized I forgot to comment on this...the Subhumans were such an amazing band - and as usual Andrew you have impeccable taste! Admittedly I wasn't that impressed by the reunion tour when Gerry got out of the slammer, but the first ep and first two lps still blow my mind to this day....that Vancouver scene was really something in the early days...and the incestuous relationship between the Subhumans and DOA produced some of the best hardcore punk records EVER!!!!! Definitely check out my hometown heroes Personality Crisis - whos drummer John Card plays in the newest incarnation of the Subhumans. Picture Elvis wacked out on Qualudes singing for a meaner Subhumans....I think you'll enjoy it!