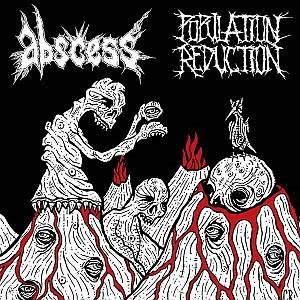 Abscess/Population Reduction
Split
Tank Crimes
Heretical confession time.
Most of what’s considered classic American death metal – the shit I supposedly grew up with – bores the ever living fuck out of me. Morbid Angel can’t hold my attention (but I love Vader, so figure that one out). I listened to Cause of Death for the first time in about a decade the other day and once was pretty much enough to remind me why I sold my copy years ago. Death’s wankery bores me to tears (and I hate, Hate, HATE Chuck Schuldiner’s voice). Deicide, beyond pointing and laughing, does nothing for me. Ditto Cannibal Corpse.
The exception that always proved that rule was Autopsy, whose doomy deathy creepy crawly goodness on Mental Funeral ranks right up there with Winter for me as landmark “whoa, wait, WTF?” albums that turned me on to doom. So it’s kind of a surprise to me that I hadn’t bothered to check out Chris Reifert et al’s post-Autopsy scum punk project Abscess until now when they’ve called it quits.
Maybe I wouldn’t have waited so long if somebody had told me Abscess sorta sound like dearly departed Texan weirdoes Dead Horse (anybody remember them?). But here they are on this old-meets-new split from last year with the similarly demented Population Reduction. It’s a nice match because both bands seem to make a career out of being bizarrely provocative without devolving into cheap and tired gore tirades. Abscess queasily bookend their half of the split with “Nausea Without End” and an out of left field cover of the Pepto Bismol jingle. Everything between is just beer drenched insanity.

As for Population Reduction, their resin-caked thrash/grind amalgam snaps, crackles and pops as they launch hilariously titled diatribes your way on “Babies are Assholes” and “Art Fucking Sucks.”

Population Reduction – “In With the Old, Out With the Cold”

Quirky, demented and listenable. That’s all I really ask.

This split is nice; Abscess never had the appeal to me that Autopsy do, but I thoroughly enjoy Population Reduction.

As for Death, I thoroughly enjoy 'Scream Bloody Gore,' which reminds me much more of Repulsion or Autopsy than other death metal of the era, but agree with you completely on their wanky, technical later material. Also concur with Morbid Angel being utterly boring.

Dammit, I used the phrase "thoroughly enjoy" twice. I clearly need to just get this Media Law studying over with and go to bed.

i thoroughly enjoyed your comments. ha.

i agree with you on all those except morbid angel. blessed are the sick is still one of my favorite albums. strangely enough, autopsy dont really do anything for me, but immortal fate (proto-autopsy) was the shit.

I like really bad death metal... I can't help it.

I am a big death metal fan, so I like all of the above mentioned. Any love for Abscess' Dawn of Inhumanity? Most people hate it, but I love it