Blast(beat) from the Past: Punished Earth 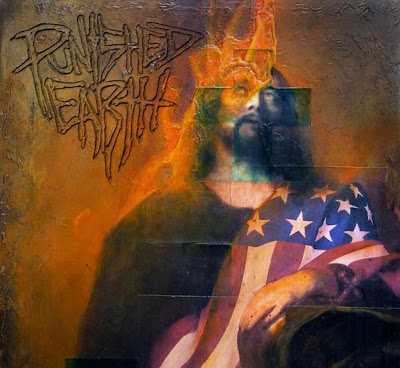 Punished Earth
Corporate Dictatory
Self Released
2006
When I was listening to the new Circle of Dead Children album in heavy rotation, it kept tickling something in the back of my head that I just couldn’t place. That was until I slapped Punished Earth’s 2006 album Corporate Dictatory in the CD changer. The Belgians certainly exhume that same Pittsburgh vibe, especially when those hogs start squalling into the mic or when thick sided slabs of death metal get all ground up in the grind.

Songs vary from serial killer fascination (the narrative knife thrust of “Alterated Biosphere”) to your more accustomed political diatribes (“Dictator of a Lost Cause”). I have to admit hearing a bunch of Europeans trash talking Dubya actually made me feel irrationally defensive of the incompetent fuck. He’s our asshole. Go find your own asshole to hate. Punished Earth also manage to work in a sly sense of humor with their songs, like they way they cleverly weave The Simpsons’ themesong into the body of “Clash of the Brainless.”
Corporate Dictatory is an enjoyable on its own terms, but it does require the right headspace. The fellatio revenge fantasy of “Swallow Bitch” is juvenile and only slightly tempered by the absurd Evil Dead samples or the fact it’s immediately followed by the feminist (if you stretch and call I Spit on Your Grave feminist) revenge tale “Penis in the Pan.”
Punished Earth just released a new album that I haven’t heard yet, but giving Corporate Dictatory a few refresher listens reminded me they’re a solid band playing a somewhat overdone style. But I’ll probably end up grabbing a copy of Rhapsodies of Decay anyway. I could do a lot worse.
Posted by Andrew Childers at 7:57 PM

How do you feel about older CoDC? I thought the new album kind of drug on after a while, too much shitty sludge. How does this compare to the older CoDC?

better than starving the vultures. not as good as the genocide machine, if that helps. it's not in heavy rotation, but it's a cool diversion when i'm in the mood.

That's enough to warrant me giving it a shot. Now to just find a computer to download this and Cyness...

CYNESS! it would not be a waste of your time to do that.