Reggae-core: Looking for an Answer 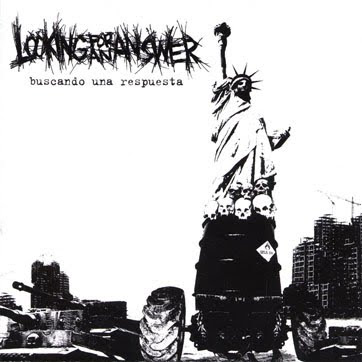 Looking for an Answer
Buscando una Respuesta
Bones Brigade
In retrospect, it probably shouldn’t surprise me that grind bands would want to get up, stand up with reggae’s slow boiling grooves. (I, myself, have felt the seductive pull of its loping rhythms.) Differences in acceleration aside, both genres are protest music at heart. Still, there I was gobsmacked when I hit the end of Looking for an Answer’s 2003 EP Buscando una Respuesta, re-released this year by Bones Brigade, and crashed face first into a fullblown reggae freakout in “Crustafari.” And damn it’s good (and not the only instance of reggae grind I’ve heard this year).

Looking for an Answer – “Crustafari”

Things seem primed for a Looking for the Answer grind explosion. Relapse backed their last 7-inch, Bones Brigade re-released this EP (apparently missing one track from the original, though) and Deep Six just dropped a collection of the band’s splits on to one handy CD for easier consumption, making life that much easier for the LFAA completist.
From day one Looking for an Answer rocked bruising, low slung grind pitched with piss and snarl. “Tierra” rumbles and blasts with a punked out opening like classic Napalm Death while “Caminando En La Dirección Equivocada” pogoes a spiked riff that would put a smile on Rob Marton’s face.
While it’s not as composed as Extincion or as rawly ragged as La Caceria, Buscando una Respuesta proves the band knew its shit right out the gate, which is to be expected from a band that’s half of the almighty Denak reunited.
Posted by Andrew Childers at 7:39 PM

their new split 10" with Ratos De Porao shreds too. I was really eager to hear it after hearing La Caceria. It definitely didn't let me down!

Reggae Grind, whatever will they think of next.

I just wish that there was a band that could deliver on the mythic "dub grind" cruelly described, but never presented, on the unfortunate S.O.B. LP of the same name.

I get why people like hip hop and metal or electronic music and metal, but it doesn't work for me. I don't wanna hear it. Oh sorry, no one else likes Minor Threat ;p

Electronic music and grind = shudder. Gives me 'Nam style flashbacks to when people thought the Locust were cool. Or grind.

Whoa, that's so good, I hadn't actually listened to the song yet. That's exactly the sort of thing I'd been looking for.

i got another one lined up for you on thursday that's just as cool.