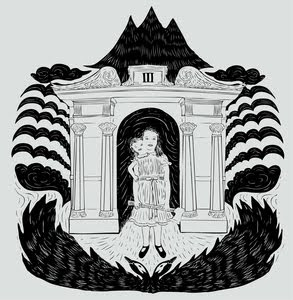 The Great Sabatini
Napoleon Sodomite
Big Cartel
Years ago an associate and I debated the relative merits of something we dubbed the electrified speed metal banjo, figuring, in our minds at least, that the speed of the five-fingered clawhammer picking style would be a nice touch. Give this a listen and decide for yourself whether it was a flash of genius or insanity.
Canada’s The Great Sabatini, featuring the drummer from Greber, sound nothing like speed metal, but they do employ gratuitous banjo over three songs on their most recent 7-inch, Napoleon Sodomite, despite, from their photos, being in possession of proper dentition. At least no one squeals like a piggy.
Over three mostly instrumental songs, The Great Sabatini belt out an incarnation of sludgy lope and ssecond generation noise rock that’s less angular than Playing Enemy and less abrasive than the almighty Anodyne and less crushingly repetitive than Cavity, opting for bass-first bruisings that swell and surge like a sinuous sine wave. In fact, this is so bass-heavy that the slashing guitars of the title song are buried under a lower register avalanche. “Helter Skeletor,” the most chicken pickin’ of the tunes, is a plodding percussion and lazy banjo plucking bit of moody atmosphere like something from a Neil Young soundtrack. “Trap Sequence” winds itself up until it bursts into a cascade of cymbal crashes and stately guitar drones before segueing to yet more banjo.
Your enjoyment will hinge entirely on how open minded you are to the nontraditional instrumentation. Honestly, I’m not sure who the target audience for this might be: banjo-loving rockers looking for something mid-paced to chill out to at the end of a grueling blue collar work day? For my personal tastes, it just lacks something propulsive that launches the best of their contemporaries.


[Full disclosure: the band sent me a download.]
Posted by Andrew Childers at 8:28 PM

"Sorry, this file has expired and cannot be downloaded."

doh! that was the link they gave me.