“Yes,” interposed Pavel Petrovich, “yes; you were convinced of all this, and decided not to undertake anything seriously, yourselves.”
“We decided not to undertake anything,” repeated Bazarov grimly. He suddenly felt vexed with himself for having, without reason, been so expansive before this gentleman.
“But to confine yourselves to abuse?”
“To confine ourselves to abuse.”
“And that is called nihilism?”
“And that is called nihilism,” Bazarov repeated again, this time with peculiar rudeness.
…
“We shall destroy, because we are a force,” observed Arkady. 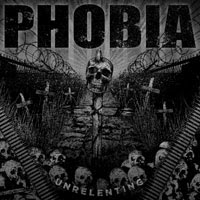 Phobia
Unrelenting
Relapse
Unrelenting, Phobia’s most accurately titled album since Grind Your Fucking Head In, finds the venerable crust/grind institution returning to Relapse’s desolation for the first time in 17 years to spark a late career renaissance. Yes, I’ve been rather down on some of Phobia’s more recent efforts, having developed a taste for their earliest work, and some of you have vociferously disagreed with me. However, I think we can all agree that Unrelenting just slays like it's a man whose job is slaying and he's just invented the McCormick Slayer. Or something.
It combines the best of their earliest, burly confrontation with that sleeker, more nuanced production from their most recent incarnations to just devastating effect. The Steve Burda/Shane McLachlan axis have been honing the art of the gutter punk ode for so long they probably wrote, recorded and self-packaged this EP over a single afternoon before being evicted from whatever moldy squat they’re calling home these days. [Citation needed.] That gives them the kind of lifer cred to spit out a sentiment like “If You Used to be Punk, Then You Never Were” without seeming like pretentious assholes. Though their punk pedigree has never been in doubt, Phobia has evolved far beyond the “three chords and the truth” mentality of their peers, pulling from a grab bag of punk, crust and metal as the music demands. The dive bomb guitars of “Enemy Within” and “Mental State” or shred-ahol of the marathon “Life’s Animosity” (all of 1:48) are a particularly nice touch. And the whole shebang is backstopped by Bryan Fajardo. Nuff said there. The guy’s congenitally incapable of turning in a bad performance even if he were to suffer a double Rick Allen in a car accident.
I was looking around my desk the other day and realized this had somehow, criminally fallen to the bottom of my infamous (and infinitely replenishing) to-do pile for about six months. So, yes, I’m way late to the party, but if you’ve slept on this one, do yourself a favor and snag this one tout de suite. If nothing else, this gives me the opportunity to post this:

Posted by Andrew Childers at 7:43 PM

Proof once again, that G&P is the foremost authority on Grind. Anyone notice a creeping influx of metal in this release?

i love that blurb... cuz it comes from a review of an album i hated. ahhhh words ripped of their context.

I agreed with you totally about recent Phobia albums being sort of lackluster some time back.

I'm listening to Cruel for the first time in maybe a year right now, and goddamn, it sounds awesome! 22 Random Acts I'll probably leave on the shelf, though.

The new one will be picked up at some point.

i'm gonna have to disagree there. i pulled out 22 and cruel getting ready for this and neither one of them jazz me. unrelenting sounds like means of existence with modern production. it's the first recent phobia album to have that vibe for me.

but to each their own.