I'm always fascinated by two-person bands. The binary unit is pretty much the smallest group you can gather together and still function as a living, performing entity. That's not to knock the isolationists like Body Hammer or Parlamentarisk Sodomi/PSUDOKU who go it alone just fine, thank you very much. However, it seems as though a two-person band combines the best elements of all worlds: a minimal number of people sleeping in the van and clamoring for a cut of the night's take with just enough human interaction to keep one person from crawling too far up his or her own asshole.
Australia's thedowngoing have taken that dynamic duo approach and have mercifully avoided any rectal detours over a pair of increasingly impressive EPs. Guitarist/vocalist Mathias Huxlex and drummer Muzz hit on what I hope will be a template for many successful albums in the future with last year's Untitled EP, 10 minutes of audio exorcism that barely tamed raw noise and rawer emotions and was subsequently snagged by Grindcore Karaoke. That should be all the endorsement you need right there. 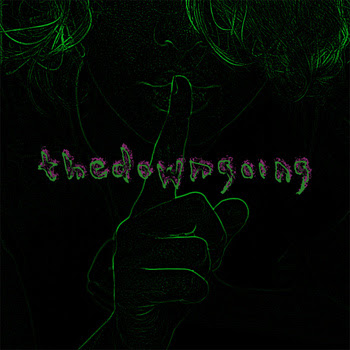 Served on an amuse-bouche platter, Huxley said thedowngoing sought to make every excruciating, exhilarating, grinding second of the micron-concise Untitled EP count.
"We definitely embraced the chaotic aspect of our sound on the Untitled EP; it felt really jarring, and intentionally so," Huxley said. "But at the same time a cohesive whole starts to unfold, which develops through the interplay between the samples and the instruments."
While being a two-man unit may have its perquisites, that could also leave thedowngoing at a sonic disadvantage when stacked up against to their more populated contemporaries. With the Untitled EP, thedowngoing made sure you'd never notice the lack.
"Perhaps it was a reactionary thing to only being a two-piece, to create a thick a soundscape as possible to compensate? But it allows us to maintain a tension between violent outbursts throughout the EP," Huxley said. "The EP was very calculated, from song length and choice through to the final mastering process, with every individual aspect working together to create the dark aesthetic of thedowngoing, which is then all rounded out by the lyrics, which focus (as you would imagine) on the negative, ugly aspects of human and social interaction and what it means to be a part of it." 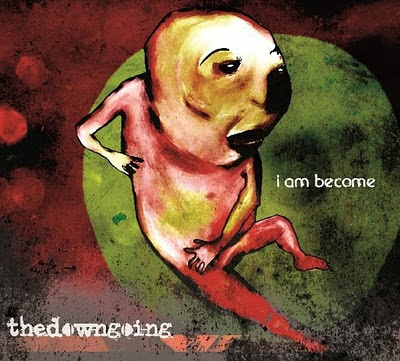 The band's growth from predecessor i am become to the Untitled EP was expansion by contraction. thedowngoing were more focused, wringing every bit of emotion out of their songs and leaving every extraneous second on the cutting room floor to ensure the mini-album would hit with maximum impact. Huxley, himself, led the way with probably the single best vocal performance of 2011; he was a man possessed (I'm still betting literally) and he left his blood, bile and :Linda Blair-worthy pea soup dripping from the microphone.
"We had a different mentality going into the recording process for the Untitled EP compared to i am become it was certainly more focused, especially during the song writing phase which felt much more deliberate, cutting a lot of the fat and emphasising the unique aspects of thedowngoing," Huxley said. "We felt more comfortable pushing our own limits this time round, which shows maybe most notably in the vocal department."
thedowngoing plan to jump back in the studio again early this year with hopes for some international dates to follow. Given the band's evolutionary curve, that immediately puts the upcoming album on my most anticipated list.
Posted by Andrew Childers at 6:22 PM

You got me thinking about duos. Shit, there are not too many out there. The only duos that spring to mind right now are OM and another Ozzie band called HALO. Which reminds me of a great gig I saw in London, UK in 2004, the lineup being Pig Destroyer, Total Fucking Destruction, Halo and Narcosis.

oh shit. that would be a fucking awesome show (narcosis not so much) but i fucking love halo.

also, 5ive and population reduction were great duos. a little band by the name of godflesh seemed to do ok for itself too. ;)

The "band" i'm in is a duo...mainly just b/c me and the drummer are the only ones in our area with similar taste. works great though b/c we write and learn music super fast.......black cobra is also a duo and their sound is huge.

iron lung seem to bang out a big sound as a twosome.

Excellent fucking band! They definitely have something going...

Jucifer is also a really good, noisy and loud as fuck duo...

by the way people interested in thedowngoing can read this interview :
http://theblastingdays.blogspot.fr/2012/05/thedowngoing-thedowngoing-is-terrific.html