My attorney has never been able to accept the notion -- often espoused by reformed drug abusers and especially popular among those on probation -- that you can get a lot higher without drugs than with them.
And neither have I, for that matter.
Hunter S. Thompson
Fear and Loathing in Las Vegas
1971 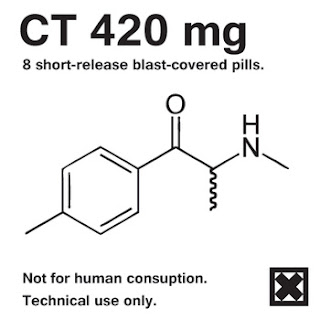 Chemical Tomb
Promo 2012
At its most basic, life is just chemistry. We may be nothing but stardust, but the fun comes from all those little cosmic particles you call you colliding around space and time. For some, like the late, great Hunter S. Thompson, life’s particle interactions were made all the more enjoyable by taking, often illicit, chemical detours.
England’s Chemical Tomb, who dice up their latest demo with retrospectively hilarious samples from anti-drug ads of yore (including one that provides the band their name) pursue the high life with a lo-fi wad of blink and you’ll miss them grindcore darts. The production sometimes fights them (that snare is determined to drown out everything else), but Chemical Tomb take swipes at the Agathocles, Insect Warfare and Wormrot back catalogs while bringing in something blockier and more brutish.
However, these Brits have a tendency to get caught up in the all-blasting-all-the-time attack mode, which blurs some of their stuff together, lessening its impact. On a positive note, the middle and end of “Cadaver Dogs” sees them stretching their artists' legs a tad to create something more evocative. It harnesses a twisting riff to a driving punk beat and a singer gnawing at your heels like a pack of hungry dogs. Just that much of a tempo shift is enough to give the song breathing space and atmosphere. They manage to pull everything together best on the churning “Malfunction,” which strikes the perfect balance between aggression and art.
Chemical Tomb haven’t consistently put all the pieces together yet, but with better musical editing they have the tools to demonstrate their fear and loathing on the Thames.
Posted by Andrew Childers at 8:46 AM

I was really hoping this band would be heavily inspired by Maruta... no such luck though.

if that's what you're after, swamp gas (next post down) is probably more your bag.