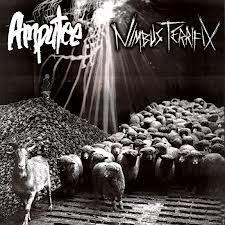 Amputee/Nimbus Terrifix
Split
PiggIron Sound
Amputee obliterate the world in a squall of mushroom cloud white noise from the second the need drops on first track "Collapsed Lung." From there every song is laced together by keening walls of amp feedback, stringing them along like a six song grindcore chain gang. From release to release, Amputee just get nastier. This is a band that loves to get down dirty-nailed in the grindcore muck with perfectly shitty production that spews abraded emotion and an ill-tempered outlook on our collective human existence.
Though they mix up the tempos a bit on this split, Amputee deep down only know one speed: balls swinging in the breeze. The vocals are almost too guttural for the album, sounding more death metal than grind, but that open throated maw is just there to devour everything in Amputee's path. The drumming is particularly effective over the six songs, pounding their way through the delightfully noisy mix at shoulder cracking speeds. These Jersey boys are on the verge of out-Assucking the almighty Assuck.
Along for the ride, Nimbus Terrifix are an OK band but lack some of the pitbull tenacity that power Amputee. Their six amphetamine-driven songs rest on the singer's bug-eyed, tooth-grinding delivery, a slavering madman stalking around scratching through a coke-sweat detox.
While his shrill delivery is spot on, the rest of the Pennsylvania trio's songs tend to blur together. And not blur together in that awesome gestalty way that elevates great grind albums into a zen-like beating. Rather, sometimes Nimbus Terrifix blur in a "has this song been going on for five minutes" kinda way. But it's not entirely their fault. There are not too many bands who could so much as hold their own against the rage Amputee are bringing.

maybe. but irrelevant. i'm not reviewing them live. all i've got to go by is what's on wax and that just couldn't stack up against amputee. but the vocals were pretty killer.

The Nimbus Terrifix side was still good in my books, but not quite in the same league as Amputee, but then again few bands are.

I love the open mouth (so I can eat everything) metaphor. It really improves this album experience if you imagine the vocalist devouring everything in his path. Its like street sharks or something.

For some reason I've never checked these guys out before. Really awesome with the exception of the sustained chord hardcore cliches occasionally popping up.