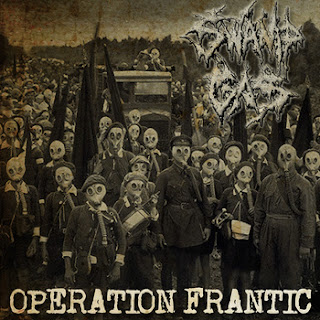 Swamp Gas
Operation Frantic
Brute! Productions
Swamp Gas emanates from that murky, humid bog that muddles the taxonomical boundaries between grindcore and death metal. Straddling the border leaves the band free to draw from either side at will as songs demand. The result is a brutish noise that would not have been out of place in the Pittsburgh death/grind scene of 15 years ago. I could see them chumming around with Fate of Icarus in particular.
Swamp Gas’ riffs, which rely on an excellent guitar tone to add heft and menace, stop just short of tech metal wankery but have a bit more going for them than just three chords and the truth. They don’t indulge in samples or any other bullshit. Instead, they string together that strong guitar, a well balanced production and a concise attack and wield it like a mallet at your delicate nethers. The vocals are a bit of a weak spot, though. The screech ‘n’ growl approach is pretty typical and maybe doesn’t have enough personality to really put Operation Frantic over the top, but it’s not detrimental to the overall impact in any way.
I particularly liked the way the drums interacted with the guitars on a song like “Severed Lines of Communication.” They lock into a loping gait at the start before blasting everything off only to crawl across the finish line on bloody knees.  The blastbeats are deployed more tactically than your average grind band (though “Third Degree” is your traditional three second song) instead of being pounded willy nilly. That means songs are allowed to breathe and tempos and intensity shift, giving the songs more life and personality over the two- to three-minute runtimes.
The fun of Operation Frantic is that its various influences and stylistic nods lets you play contra-historical what if games to pass the time. What if Cattle Decapitation got down with grindcore concision? What if Rob Marton had more death metal in his soul? What if none of that really matters and instead you should just enjoy Swamp Gas for what they are?

[Full disclosure: The band sent me a download.]
Posted by Andrew Childers at 7:36 PM

i got nothin but fart jokes.

Whoa! This is some top shelf tittays, my man. That guitar tone is stronnng. Almost reminds me of a good Dying Fetus tone.