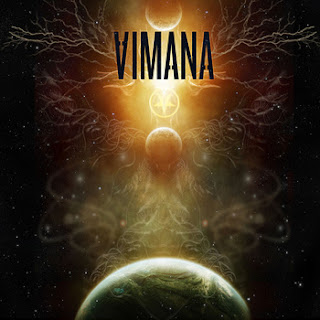 Vimana
The Collapse EP
Bandcamp
In The Sandman story arc "Calliope," Neil Gaiman told the story of Richard Madoc, a washed up writer who buys and repeatedly rapes the titular Greek muse to revive his flagging imagination. When Calliope's ex eventually shows up to liberate his former lover, he curses Madoc with an overflowing of ideas. The inspiration comes so rapidly that the writer can't keep up, drowning under the weight of what he sought the most. Something of the same could be said about Vimana, which features former Cephalic Carnage mainstay Zac Joe. The band shove a cornucopia of musical ideas into the scant four songs and 15 minutes that comprise The Collapse, but it’s that very fecundity that stunted my enjoyment of Vimana’s music.
Like Cephalic Carnage before them, Vimana are intent on cramming every possible idea into every song, but they often struggle to develop a coherent through-line that unifies their music.They deploy a full ’80s arcade of blippity blooping guitar noises to explode the song “Destroy Industry.” It’s a five minute loop of frogger croaks and pong-splosions of 8 bit booping that occasionally q-berts its way back to something resembling death-grind. Alternately, “Resent Complacency” is nearly two minutes of the title being howled at you in a deep-chested Nile growl and little else.
Vimana's music far too often feels like three or four much shorter songs shmooshed together with greater (all seven moody minutes of "Fire is Born," paradoxically the longest and most focused of their material) and lesser (the scattershot "Destroy Industry") success. Vimana loom and zoom around like the cosmic chariots for which they are named, but I'd like to see a little more control and a better sense of direction.

[Full disclosure: the band sent me a download.]
Posted by Andrew Childers at 8:29 PM