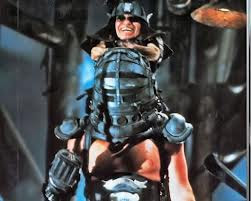 I asked you on the Facebook page if you're up for yet another round of bracketology, and you all seemed most enthusiastic about pitting your favorite grind albums of all time against each other in a musical Hunger Games. So here's Grindcore Bracketology 3: 32 albums enter, only one blaster gets to run Bartertown.
For those of you who missed out on the last two years, here's how it goes down. I've broken the albums down into four conferences of eight albums each. Just like in the hockey playoffs, the eighth ranked album has to face the first ranked album while the others are paired up 2-7, 3-6, and 4-5.  For the visually-minded, you can view the brackets here.
You vote for your favorite in each match up and the winners get to fight another day.
One important change this year: I'm opening up voting both here and at the Facebook page. Vote where ever is most convenient for you. You're on the honor system to vote only once, but I know most of your real names so I'll keep you honest.
Before we kick off the voting next week, here is your chance to nitpick my set up. Feel free to offer suggestions about reordering the initial matchups or adding or deleting albums before we get started. I've organized the albums into two leagues: The Geezers (representing the classic first and second wave records) and The Upstarts (the modern classics). Within each league I've created two conferences. For the Geezers, I've (very roughly, here) broken out albums that seem to have more of a metallic base versus those that seem more directly tied to punk and hardcore. Over on the Upstarts side, I'm pitting your arty pretentious types with their weepy songs and carefully cultivated angst against the knuckle-dragging troglodytes who like to pick their nose and kick your ass without over-thinking it.
Voting will start next week. May the best record win.

Your brackets are well constructed. However, I have a request which I'm pretty sure you will tell me to go stuff up my ass. What if Scum were to abstain? I mean, isn't that record pre-ordained to win (your expressed preference to The Inalienable Dreamless notwithstanding). Can't you just declare it the winner so we can have some fun arguing over second place? Really, I just want the chance to vote for Extreme Conditions.... as that is probably the most underrated record I've ever heard.

This bracketology runs the risk of turning friends into enemies. The lists are really well thought out and structured nicely, a well rounded bracketology, personal nit picks would be to replace either ANb PCP torpedo or Cellgraft with Suffering Minds ST release (I love both releases, but feel Suffering Mind are the stronger party) and maybe throw in thedowngoing in there too. Possibly also replace Unseen Terror with a G-Anx release, but that might not be in line with the grind community.

Don't you think Extreme Conditions... is more of a metal record than a punk? If so...swap it with Horrified?

Also with Alex,would rather see Suffering Dome than Nasum getting two spots, or Kill the Client.

We could also always make room for Swarrrm =P

Okay, my whambulence is out of gas. Excited for this, thanks Andrew.

miskatonic: i can't see how scum could possibly be left off. though that's not the album i'm betting on winning. i think there are more people here who prefer feto (even if they're wrong).

alex/strife: i'll consider swapping in some suffering mind. i think you guys might be right there.

I don't think Scum is nearly as strong as it's hyped to be (I'm definitely a "people here who prefer FETO"); if it makes it past the old people bracket, I think there are enough strong modern records that it won't last past its first Upstart matchup.

Swap need to control with sounds of the animal kingdom. Better album in my opinion and more unique and out there. Besides it was in your bakers dozen

Surely Extreme Noise Terror's holocaust in your head should be in the punk geezer section. what about Human Remains using sickness as a hero?

I would vote for adding:

v/a Deathpower with Multiplex, Satanic Hell Slaughter + Gibbed) - note this is the second version with the revised Gibbed tracks

i've swapped in suffering mind and ENT (how did i forget that?)

i'll think over the brutal truth suggestion. i prefer animal kingdom but i always thought i was the outlier there and that need to control was generally considered the better album? thoughts?

Here's another reason to remove Scum: The posters here are all grind aficionados. This means they've all been faced with the assumption that Scum is the best grind album ever. A lifetime of this leads to a natural backlash. Add to that, a lifetime spent questing for a grind album even better than Scum. Too much bias is built up for and against that sucker. It needs to be evaluated apart from everything else.

Siege was a greahardcore band that made a very influential hc record, i think it should not be included. Maybe replace with morbid florist or phobia's means of existence or plutocracy's dankstahz or excruciating terror's expression of pain.

Helvete sucks, Human 2.0 rules. You have seriously handicapped the swedes...