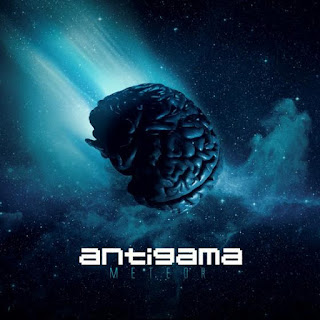 Antigama
Meteor
Selfmadegod
Antigama's Meteor crashes through your speakers like that Star Destroyer that eclipsed the screen at the start of the first Star Wars film. The band's implacable intergalactic oddball-core just grows and expands until its futuristic sheen obscures your vision, burning out your retinas with the flare of its receding ion drives.
While Meteor is less immediate and aggressive than immediate predecessor Stop the Chaos (that said, "Prophecy" stalks the feral urban predator vibe sorely missing from Book Burner), it's still a varied, unpredictable skim across the whacko-grind event horizon that's on par with Antigama's better efforts like Warning. Once again the prolific Poles have crammed their space probe grind full of the kind of unexpected, off kilter excursions that will either leaving the marauding Martian hordes plotting our demise rolling with laughter or hopelessly paralyzed with confusion. No matter how well versed you are in Antigama's outré oeuvre, you're probably not going to see the scat breakdown and ZZ Top boogie shuffle of “Fed by the Feeling” coming, even after I just told you that. Ditto the space age keytar breakdown in the middle of  “Turbulence's” intergalactic belly dance gyrations. I also really dug the super reverbed vocals and Swans plod of “Untruth,” which sounds like it was salvaged from the rusted, derelict hulk of Red Harvest's industrial Death Star, that punctuated Meteor's final impact.
Antigama just continue to get better. Where I found their earlier material too scattershot and unfocused, Meteor continues their recent string of bizarre outings that still feel cohesive and purposeful. I may not have a clue where Antigama are about to take me when I hit play, but clearly they've got a course planned. Traveling through hyperspace ain't like dusting crops, boy! Without precise calculations we could fly right through a star, or bounce too close to a supernova and that'd end your trip real quick, wouldn't it. And I wouldn't want to stop this trip short.