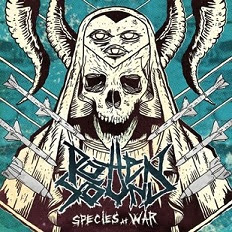 Rotten Sound
Species at War
Relapse
As good as Rotten Sound’s long players are, after the Napalm EP I find myself looking forward to their short form efforts even more. The ferocious Finns seem to embrace the challenge of constrained running times, turning in some of their best and tightest material.  Like the 11 minute Napalm, Species at War gives use a six song snack pack, but this time Rotten Sound have shaved a whole three minutes off the run time. They sound even more hopped up on blastahol, and that gives Species at War a primal, troglodytic edge occasionally missing from their cleaner sounding full lengths.
Though they've shaved the songs down to the bone, Rotten Sound leaves just enough gristle to make each one distinct like the predatory groove of "The Game," the slouching "Salvation" or the multipart grind of "War." The blend of adrenaline and grit throws back to Rotten Sound's earliest, grimiest efforts. Their recent albums have been staggering waves of crusty grind, but they have also erred on the side of clean production. Species at War finds Rotten Sound riding that sweet spot between clarity and a needed atavism that gives them that perfect grind punch, jumping up through your speakers to hit you in the vertebrae with a sack of the Finnish equivalent of nickels.
I know this is probably intended to be a stopgap teaser for pending full length, but I'm really liking the way Species of War stands on its own. Unless, of course, the next record is t
his raw and raging. If so, count me in. Until then, I'm going to flip this one over and hit play one more time.
Posted by Andrew Childers at 6:21 PM