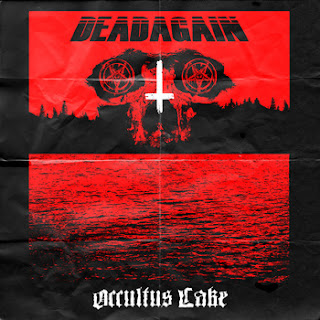 Dead Again
Occultus Lake
Bandcamp
Death-grind deadites Dead Again crawl forth from the crypt (of either Rays or the Keeper, take your pick) to raise a cyber-zombie horde that pays tribute to every failed space mission and righteously pissed off demon lord that boasts a body count worth noting. Occultus Lake draws from an admirable cross section of science fiction and horror such as Dune (“The Sleeper Has Awakened”), Alien (“Chestburster”), Starship Troopers (“Bug Hunt”) and the ubiquitous Hellraiser IV (“The Lament Configuration”) to pepper their B-movie broadsides.
Featuring members of Origami Swan and Anion, Dead Again rolls together death, grind and hardcore in approximately the same ratio as the most recent Napalm Death efforts but adds just a soupcon of NOLA sludge swagger to give their songs an extra layer of swing as they lurch from blasting biker grind to vein-opening trudge. In fact, the sludge may be Dead Again’s strongest suit. Opener “The Sleeper Has Awakened” swings a giant sandworm slither through a crusty hardcore groove that’s so captivating that it’s almost (but not quite) a letdown when Dead Again bring the grind. But that’s part of what makes Occultus Lake so compelling: the sheer diversity. With the exception of the extremely rare missed step (the plodding “Empty Burial” nearly derails the whole album early on), Dead Again has cobbled together a shifty little beast of a record that keeps coming up with new ways jump out of the shadows just when you think you've figured out their serial killer toolkit.

[Full disclosure: the band sent me a download.]
Posted by Andrew Childers at 7:03 PM

This KILLS! One of the best finds of the year for me, so far.

speaking of kill, keep your eye open for new who's my saviour this fall!

When I saw your facebook post regarding new WMS? I actually got taller I was so excited.