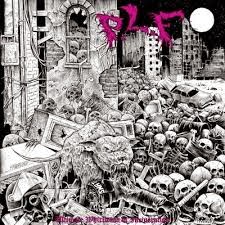 P.L.F.
Ultimate Whirlwind of Incineration
RSR/Blastasfuk
Growing up in Tornado Alley, storms were a form of entertainment. I remember sitting on the porch with my dad as a kid watching the sky turn a queasy green right before a really ripping front would tear through the town. Black clouds would build over the horizon and we’d sit there as long as possible, waiting to catch a glimpse of a twister touching down before running inside for shelter.
P.L.F.’s Ultimate Whirlwind of Incineration channels some of that onrushing Great Plains thunderstorm vibe as the guitars brew up whirlwind riffs that chart dangerously high on the Fujita scale. “Rejection of Pathos” lashes and snarls with the playful, arbitrary malevolence of a tornado, the way it flays about at random destroyed some neighborhoods and leaving other blocks untouched. Paired with the high winds of guitars, the drums rain hail down in icy, pelting chunks. But once the initial welts fade, the drums will occasionally fade into the murky production, becoming the background patter of a thunderstorm on the roof.
And if Ultimate Whirlwind of Incineration has one flaw (and that’s a rare misstep for a P.L.F. who have consistently delighted), it’s that in nearly 25 minutes, the band doesn’t make room for any variety. Anybody who’s ever hunkered down in a storm cellar to wait out a tornado can tell you that eventually that frisson of danger from the storm sirens fades into a gray monotony as the wind’s unceasingly shrill howl becomes more background noise straining to capture a childhood imagination. A good peal of thunder and a flash of nearby lightning every now and again (the Assuck cover is a good start) would have could have foisted Ultimate Whirlwind of Incineration into storm of the century contention. Instead, it’s just one more good thundershower that spices up a hazy, humid summer and fades like a crack of heat lightning.

[Full disclosure: I received  a download for review.]
Posted by Andrew Childers at 9:05 PM

This and devoius persecution and wholesale slaughter have been blasting my ears pretty regularly. You seen the Gilman speed trial for plf? If not prepare to have your perception on time and the limits of the human body blownhttp://m.youtube.com/watch?v=re_hkmknVhQ