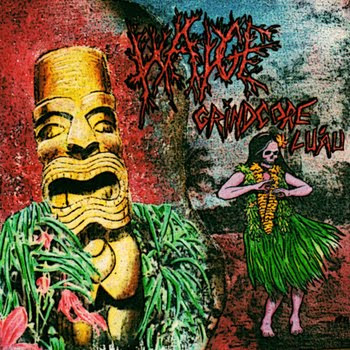 Wadge
Grindcore Lu’au
Grindcore Karaoke
Wadge’s tiki-tickling Grindcore Lu’au is covered in as many layers of deliberately lofi noise and scuzz and Dick Dale’s surfboard was covered in layers of Sex Wax. For all its colorful art and goofball conceits, Grindcore Lu’au is not an overproduced bit of throwaway fluff. Grindcore’s Don Ho starts with a hilarious rip on Napalm Death’s “Multinational Corporations” that extols the virtues of Hawaiian vacations and starts surfing 40 minutes of double picked surf rock grind. The Hawaiian elements and aquatic surf style guitar are organically blended into the grind in a way that makes perfect sense on “Extremity Jet-Planed/Eyes of Crust/Obstinate Erection” and “Drink for a Minute (Suffer the Distilled Men).” Proving the lofi scratch of the sound is purely deliberate, “Frenzied Suffocation” builds to an ear-bleeding static tsunami before the waves crest and break over the sudden clarity of surf-death hybrid “Demon Dogs of Waikiki.”
At nearly 40 minutes, the only criticism of the album is this is a hefty listen. In fact, Wadge could have easily pulled a Solomon and halved Grindcore Lu’au and passed it off as two full lengths of Slayer-approved proportions. I don’t see myself pulling this one out on a regular basis, but there’s no point in bitching about too much of a good thing. Pass the poi.
Posted by Andrew Childers at 7:42 PM

Was wondering when this would reach the might G&P if at all. Brilliant album, 40 mins long? Hell that gives almost 4 times the dose of what grindcore calls a traditional release, additionally self genre mockery in grindcore is hard to find in good bands, and this lives up to the challenge.

Everything that you are reviewing sounds like shit and does nothing for genre.

Not sure if thats directed at me or you, or if that is an example of self mockery or meant with venom.

Rosemary, why don't you please continue:

A. Horseback Riding
B. Eventing
C. Working Out
D. Participating in the Philidelphia tea party

having talked to rosemary on back channels, let's avoid a flamewar over a misunderstanding. the comment is more about the general antipathy toward grindcore karaoke as a whole and the quality of the music it's putting out. so everyone (i guess other than ryan who has a dog in this fight) keep that in mind.

Ok, sorry Mr.Childers, but as the most important asset in the Grindcore Review world, we have to protect you from those who intend you harm!

Personally I really love the Grindcore Karaoke releases, and have spoken to Randall a number of times, hes not doing to be new or anything, he does it for the love of the music, hes probably ploughed into it in the region of a thousand dollars to keep it all free.

On a side note, me and Mr.Randall will be working together on something illegal yet grindful.
(Leaves on a cliffhanger)

don't worry about me. i'm a big boy. it takes more than a difference of opinion to hurt my feelings.

rosemary was the very first commenter ever here and has been a very cool person behind the scenes and a valuable source of info so i knew something was up. meanwhile, please return to your regularly scheduled nerd fights.

I was just kidding around. Sorry, I just did the old look up a persons interests and ask them to pursue them racket. I have no issue with someone hating GK. My urge to troll is just too strong sometimes. Carry on,

To be fair, I listened to this about a month ago and strongly, strongly disliked it (so much so that I could only listen to 30 seconds or so before I deleted the whole thing from my hard drive.) With a few exceptions aside (Robocop, Chulo), I tend to agree with Rosemary on the generally poor quality of the GK releases (although I do applaud him for undertaking it in the first place, I suppose.)

Wadge is definitely a divisive release.The recording is really weird, it just clips the whole time, and there are "Hawaiian" instruments on a grindcore record. The whole thing is bizarre. It's uncomfortable, hilarious, but uncomfortable.

I have listened to a bit of this release, and I'm not really sure how I feel about it.

In general, I agree with Dessicated about GK: It's really cool that Randall is doing it, but aside from Robocop none of it has gotten to me.

i enjoyed wadge for what it was. but i won't be listening to it on endless repeat any time soon. mostly it just put me in the mood to listen to jesus of nazareth instead.

but all of this does raise a good question. i've tried to avoid going through every GK release but i've heard a few. does randall's model really add anything of value? no gang colors and robocop i loved before he came along. i think self deconstructed have a really nice EP. i'm gonna get to chulo cuz they specifically asked for a review. marion berry is ok. but on the whole, it seems like he's dumping a lot of stuff out there without regard for quality.

I have spoken to him a number of times, and the releases he puts out on Grindcore Karoake are releases he personally loves and people he is good friends with. Its more of a social thing for him, than an industry revamp.

When robocop II came out on GK, it was a huge help, and attracted attention. With so many bands on there now, it's a little less of a deal. I'm not sure our demo had as much of an impact in that sense. Either way, its a really great thing for bands, but I agree with alex, its more of a personal thing now rather than a potential game changer.

I think for example, if he had 1 or 2 releases a month, and eventually started charging small amounts, it would have really taken off. That said, some of the things he's done, especially the digital booklets, are really inventive.

Essentially, i think the idea will need to be refined, but its good that he's actually making an attempt at putting out music in a manner that has relevance in the digital age.

I do have to commend the digi booklet thing and the model itself, it's a very interesting attempt.

it seems like a lot of good ideas that i'd like to see applied with more of an endgame in mind. so far GK just strikes me as very helter skelter.

Something that just came to me, is that, at the very least, it improves networking between bands. I've definitely become more aware of who's operating that I like. So maybe overall this could be helpful in organizing shows, etc. Just a thought.