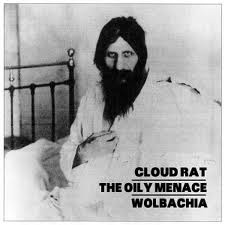 Cloud Rat/The Oily Menace/Wolbachia
Split
IFB Records
Who doesn't enjoy the occasional pleasant threeway? Certainly everyone's favorite sex fiend and Romanov embarrassment, Grigori Yefimovich Rasputin, had a hard time saying no. The Mad Monk's glowering gaze presides over the sweaty, tangled bedsheets and awkward, giggling morning after conversations following Cloud Rat, The Oily Menace and Wolbachia's drunken experimentation on their threeway split LP.
Standing at the center of this 12-inch experience, both literally and figuratively, is Michigan's The Oily Menace, who follow up their outstanding All Out Folk Attack EP (recycling some songs in the process) with a blistering outpouring of grindified protest music and their own breed of sonic outrage. The Oily Menace employ their instruments as ideological weapons and it's no exaggeration to say they are quickly becoming the grindcore equivalent of The Clash. This could be the only young grindcore band that really matters. They are not mouthing cliches when they advocate for a locovore lifestyle (to the point of including kale seeds in the record) or taking outraged DIY potshots at everyone's favorite car company on "Scion and Vice." There's a conviction that comes through that can't be denied. The Oily Menace just get better and better with each release.
Cloud Rat, who kick off both sides of the record, also flamboyantly flash a few new tricks, following up on their excellent self-titled album. The same frenetic blasting that tilts more toward fast hardcore than grind is just as frenetic and jolting as ever. This outing, the vocals are the focal point, an unusual choice for a grind band, but the frothing bile and searing spit demands attention. It's a great curveball that really plays to Cloud Rat's strengths. While most of their seven songs start blasting right where their last album left off, Cloud Rat do change up the tempo with "Battle of Bulls Run," a knuckledragging trudge that kicks off side two of the album. It's great to see them playing against type and succeeding. It adds another venomous bolt to their quiver.
After all that blasting, Wolbachia are something of the odd men (and women) out. The band brings a bruising breed of female-fronted grind akin to Cloud Rat brainswapped with angular, second generation noise rock a la Anodyne and Knut. The band loves nothing more than double-footing the brake while doing 100 mph and handbraking into a sliding hardcore swing.
Once again, IFB have done a beautiful job with the packaging, printed on old 12-inch sleeves that have been folded inside out and recycled. The lyrics booklet is also plastered over with pastiche of ironic corporate logos and slogans that hearkens back to the chop and glue montages the celebrated Winston Smith used to turn in for Dead Kennedys albums.
Cloud Rat, The Oily Menace and Wolbachia deliver a well balanced and fluid threesome of a record, and you don't have to delete your browsing history in shame after enjoying it.

I need to get my hands on this. The Oily Menace are fucking righteous, and your Clash comparrison makes me a little hard.

Also Old Rasputin is one of the best beers, hands down.

@mr. Childers: since wolbachia are shadowy grinders from a shadowy city that I love....any thoughts on the realignment? If you picked Minnesota to be the killer in the west buy me a lottery ticket!!!

i'm still processing the new alignment, but clearly bettman wants me to hate chicago and detroit more than i already do. if they bring back the old norris division name, i'll be happy.

as a dc denizen, i'm lmfao at the craps having to go thru philly and pit now to make the playoffs. winning the southeast is like being the tallest guy in munchkin land.

also, you hear anything on how they'll handle the all star game? i haven't heard anything about that.

haven't heard anything about the all star game either....everyone in this city will be voting for pavelec or kane....agreed about the capitals; although we did kill a few egos tonight snapping bostons 15 game points streak. i knew boudreau wouldnt be without work for long...and that dude needs a tan anyways. my dream of stepping on everyone in the central is now bust bust bust but we stand to at least be better than columbus...we'll be seeing your boys in town many many times in the near future.....

am impressed from this post....the person who create this post it was a great human..thanks for shared
this with us.