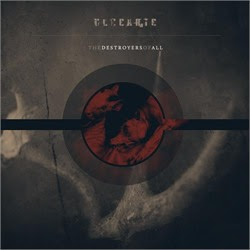 Ulcerate
The Destroyers of All
Willowtip
Of all the tricks in a film director’s repertoire, the one I probably find most engrossing is the long tracking shot. The long take is so dramatically compelling and the long, unbroken takes force actors to really perform off each other in a way that’s more organic than Hollywood’s insistence on two second scenes. When you mention great long takes, most people will point to Scorcese’s famous Copa Cabana scene in Goodfellas. That’s certainly a great scene, but don’t forget the amazing long takes in Children of Men (yes, digital trickery was involved), the phenomenal trench scenes in Kubrick’s Paths of Glory or drunken pub patrons enacting their own solar system in Bela Tarr’s apocalyptic Werckmeister Harmonies. But the king of all tracking shots is Aleksandr Sokurov’s Russian Ark: a whole 90 minute movie that’s one unbroken tracking shot that wends through St. Petersberg’s Winter Palace, featuring a cast of nearly 1,000 -- including two full live orchestras.
I get that same sense of dramatic profundity and technical mastery from Ulcerate’s latest album The Destroyers of All. It’s not enough that the songs have emotional content, but those emotions should move and expand over the course of a song. Hell, you could consider the entirety of the album to be single sinuous thread that streams you along for the better part of an hour. The swaying, viperous grace of “Omens” snaps against a blastbeaten back line while the ominous magma flow riffs of “Burning Skies” wash over the hurried double bass pounding of the drums, incinerating everything in its path and then just abruptly stopping, leaving the song hanging without resolution. But “Dead Oceans” immediately seizes that lingering anxiety, twisting the need for an emotional payoff into a warped, flayed bit of guitar strangulation.
The Destroyers of All’s slow motion apocalypse of fire is irresistibly compelling, building off what made Everything is Fire such an enjoyable listen and immolates it as a burnt sacrifice to your pleasure.

i know! there's something mesmerizing about them. russian ark is just compelling to watch a single tracking shot evolve the way it does. i hate the bourne-ification of movies. or more precisely, i hate everyone using the quick cut/shaky cam thing whether it adds to the movie or not.

In addition to the long takes you mention, I'd add that I love the hallway hammerfight in Old Boy that plays out like a sidescrolling beat-em-up arcade game. Even down to the camera sliding back and forth with the main character.

Also, I fucking love Ulcerate and I love that album. They've taken their Neurosis plus Immolation (I saw you sneak that one in the last sentence, hotshot) in a really weird direction with this album. One of those albums that just sucks you in and drowns you.

park chan wook is an amazing director too. love the vengeance trilogy. his vampire flick didn't move me that much though.

the immolation thing was totally an accident cuz that's not a band i listen to. i was just playing off ulcerate's fondness for fire.

Well, that's a happy coincidence, then!