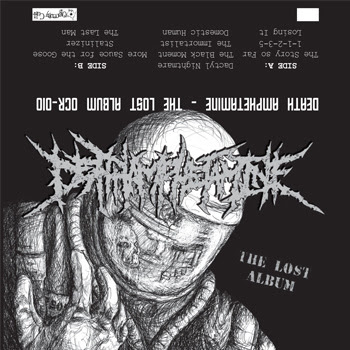 DeathAmphetamine
The Lost Album
Obscenity Cult
If there were an underground punk/metal version of VH1's I Love the 80s, DeathAmphetamine would be the not-so-ironic cast member dishing on their love of the Reagan/Thatcher years' musical bounty. DeathAmphetamine dwell in that twilit netherworld between blackened proto-death metal and grind with heaping helpings of throwback adornments. The Lost Album is an emulsified whirlpool of hardcore swagger, grind speed, death metal chunk, rasping black metal vocals and the occasional foot on the amp Iron Maiden gallop. And then "More Sauce for the Goose" lards on King Diamond shrieks just for good measure.
If that all sounds convoluted, it's because it occasionally is. While DeathAmphetamine's undercarriage is plotted firmly along the death/grind axis, their songs' superstructure is piled Babelian high with confections of florid guitar solos and extra-genre excursions. There are times when the planets align and the pieces neatly fall into sharp profile, as on "Losing it All," which sounds a tad like a slightly less assured Dephosphorus. The supple bass undercurrents of final song "The Last Man" are another clear album highlight. But there are other times, again King Diamond vocals, where the souffle collapses under the weight of its own metal cheese. The mileage you get out of The Lost Album will depend largely on your affection for heavily ornamented music. Though I found some of DeathAmphetamine's musical digressions distracting, I'm sure others will gravitate to their unique blend of various influences and give them their proper credit for trying something different.
Posted by Andrew Childers at 5:59 PM

This sounds fucking awesome. I need to check it out.

Oh wait, its retro melodeath. Weird. What I had in mind was way better.

If this was an actual crust/crossover band from the 80s verging on grind, but somehow forgot to take out the tom araya/king diamond screams, I would have loved it... As it stands its not my thing.

crushing your hopes and dreams one poorly worded album review at a time.

but now you have something to shoot for with your next project.

"Out NOW on 4 different color cassettes" !
more bands should do ^this^

u got my hopes up when you said extra genre excursions.

Good thing I read the comments, because I had the same exact thoughts Ryan did. Next time eh?

The new Spewtilator ep (which can be heard over on my page) has some moments of Hell Awaits Tom Araya; check it out!

Oh and Andrew, thoughts on the new Cellgraft?

sorry patrick. i consider king diamond vocals sufficiently outre to qualify as extra-genre. but that could be just because i hate king diamond.

i just heard a couple days ago cellgraft have a new one. haven't even had a chance to get it yet. but definitely on my to do list.

looking forward to your review.

I actually really dug this! It doesn't sound quite like what I expected, but it's rad. It's not very grind most of the time, sounding more like death metal or thrash (or even melodeath as Ryan said), but I like those things, too.

I bought the digital album, because I really can't be bothered with cassettes. I mean really. REALLY.