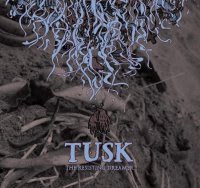 Tusk
The Resisting Dreamer
Tortuga
More than two years after the mindfuck camping trip nightmare that was Tree of No Return, the three-quarters of Pelican that comprise Tusk return with a revamped line up and a revised sound.
Anyone looking for another round of Tree’s Pig Destroyer/Neurosis cage match sound should just stop reading now. With nary a blastbeat in sight, The Resisting Dreamer brings in a more pronounced influence from the band members’ other project. Recorded during sessions for Pelican’s breakout The Fire in our Throats Will Beckon the Thaw, Tusk’s four new tracks swim in the sludge the other band has steadily been shedding in favor of a leaner sound.
Instead it’s The Resisting Dreamer that boasts the same beefy bottom end that made early Pelican and fellow Tortugans 5ive so enjoyable.
“The Everlasting Taste of Disguise” opens like a Jesu outtake before greasily sliding into jarring nightmare territory where spiky, corkscrewing guitar riffs stab at you like the flock of marauding crows in The Birds.
Final instrumental cut “The Lewdness and Frenzy of Surrender,” weighing in at a hefty 16 minutes, could easily serve as a companion piece to the recent Sunn O))) and Boris collaboration album.
The dominant lyrical theme is “ruin,” album as Young Widows’ Even Patterson and Toby Driver of Kayo Dot (standing in for MIA vocalist Jody Minnoch) expounding on crumbling realities literal and figurative.
Though it’s a solid and enjoyable sludge album, the new direction just makes Tusk feels redundant. If this is the band’s future and not an artistic blip, they might as well recruit Bryan Herweg for the next outing and call it what it really is: a throwback Pelican album that experiments with vocals. It would probably sell twice as many copies that way.
Posted by Andrew Childers at 8:39 AM