The end of the year countdown list is an institution every bit as sacred as the one second song. So we humbly plowed through the ridiculously tall stack of crap we bought this year to sift out the five best records of 2007.
We look back on 2007 as a year of that presaged the advent of acoustic grind, the continued dominance of the Swedes and cinematic beatdowns, leaving us with the distinct sensation of insects burrowing under our skin. And we liked it. 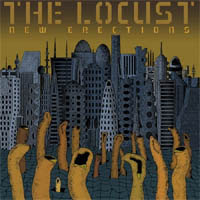 5. The Locust
New Erections
Epitaph
One for the message board haters.
The worlds have warred, our new insect overlords have pillaged and gone and The Locust drone Justin Pearson is left to wonder whether there is any point in rebuilding. New Erections' 23 minutes are laced with enough paranoia and dystopia to fuel the second coming of Phillip K. Dick.
Returning from the meandering wtf moment that was 2005’s Safety Second, Body Last, The Locust have inched upped the bpm quotient once again but haven’t forgotten the lessons of slightly longer songs with a few slower moments tossed in to create their most dynamic and expansive record to date.
Alex Newport, in his third outing as the band’s producer, wrings a tight performance out of the spastic crew in rubber bug suits. The songs careen from blastbeat fueled freakouts laced with their trademark keyboard squonk to slowly blipping bits of frazzled computer sludge. The longer songs give Pearson a more expansive palette upon which to expound his post-apocalypse now meanderings.
Almost no band has been as divisive in their career as The Locust and New Erections won’t be winning any converts/defectors from either camp, but for those with a taste for the adventurous, the hardcore arthropods have swarmed back with their finest outing.

4. Graf Orlock
Destination Time Tomorrow
Level Plane
Load up Hot Fuzz on mute and fire off this burning little EP. These marauding cinophiles make a better soundtrack for Simon Pegg and Edgar Wright’s hilarious action film send up than even Robert Rodriguez’s climactic score.
Bad action movie samples abound, more bad action movie dialog serves in lieu of lyrics and it’s all soldered together with well executed Pig Destroyer-ish grind and a soupcon of '80s thrash.
But let’s be honest here, one of the reasons this EP made the cut is because of the absolutely stunning artwork. Instead of a jewel case, the CD is lovingly cradled by face hugger from the Alien series and wrapped in a “Uline state shield bag” that warns “Handling requires caution.” It’s the best packaging gag since HeWhoCorrupts packed the Microeconomics album in a wallet complete with credit cards and an itemized business lunch receipt. 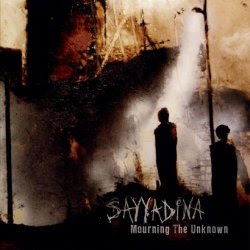 3. Sayyadina
Mourning the Unknown
Sound Pollution
Yes Sayyadina are Swedish. Yes they sound a little like Nasum. No that doesn’t mean Mieszko Talarcyk is coming back.
But in a countdown full of contenders playing fast and loose with grind’s established ground rules, we take a moment to remind everyone that when executed well with slashing production and catchy songs, there’s nothing wrong with tradition.
Bringing in some of the hardcore vibe from his side project, Victims, Andreas Ericksson leads his cohorts through 21 tracks of rampaging grind on Mourning the Unknown that delve deep into the band’s psyche without having to bring in a shrink. They tackle isolation, loneliness and depression in a satisfyingly non-emo way.
Eriksson’s production gives the songs a heft and a bite, letting each instrument stake out its spot on the killing floor. Jon Linqvist’s high/low vocal tradeoffs with Eriksson also give each song a dynamism and personality.
Sayyadina have certainly studied at the feet of Nasum (Eriksson played bass on Shift), and the trio has absorbed those lessons well. They are on the verge of creating their own space in the crowded Swedish grind scene and are definitely a band to watch moving forward. 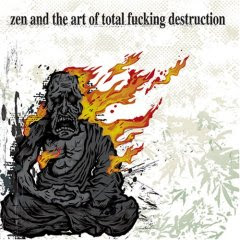 2. Total Fucking Destruction
Zen and the Art of Total Fucking Destruction
Translation Loss
I know it’s only acoustic grind, but I like it.
No we had never heard of it prior to 2007 either, but that’s just part of what makes Rich Hoak a metal visionary.
The former Brutal Truth drum basher and his crack A-Team were back on their second outing in 2007, a three part performance art soap opera that defied everyone’s expectations.
On Zen and the Art... TFD unleashed 10 new tracks of stream of consciousness grind, particularly standouts “Mad Pig Disease” and “We are all Elvis Now.” As a bonus the multimedia disc also includes footage of a 10-song live set showing the band in their natural habitat. But it’s the four song acoustic diversion bookended by those two sections that surely had many a grindcore tongue wagging this year.
The subdued take on TFD standards “Kill the Jocks and Eat their Brains” and “Bio-Satanic Terrorist Attack” give those songs a new depth and texture beyond the original versions.
For a band that has posited itself as cultural terrorists, they deftly pulled off a unexpected bit of musical legerdemain and subverted grindcore itself.


In any other year, that accomplishment would have warranted top of the list honors, but as Connor MacLeod knows all too well, there can be only one… (I know that would have been a slightly less lame reference had Graf Orlock been just a teensy bit better.) But keep reading....
Posted by Andrew Childers at 1:25 PM