Pearls from Swine: Pig Destroyer unleash a beast of an album 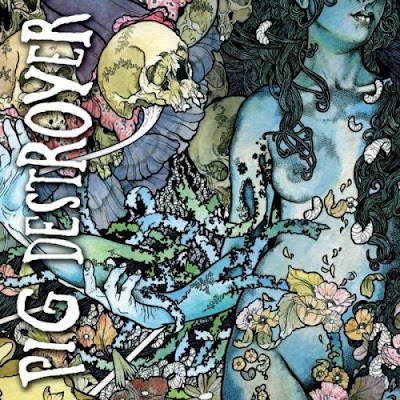 “She hung herself from an overpass down in McClean where the old trees loom…”
Welcome to Pig Destroyer’s Northern Virginia, a devastating tour through the ‘burbs of our nation’s capital and inarguably the best thing to cough blood on grindcore’s shoes all year.
Phantom Limb, the band’s third album for Relapse, crashed onto the scene like a grinding DUI hit and run, the sonic equivalent of rush hour traffic careening through the Mixing Bowl.
The only album in the metal family that came close to Phantom Limb’s caustic beatdown this year was Neurosis’ latest epic. While J.R. Hayes and company needed half the time it took noisecore’s elder statesmen to reach the pinnacle, the emotional catharsis was the same. Sort of like the ”you take the high road/I’ll take the low road” pairing of 2007 metal.
Obviously, we weren’t the only ones to enjoy Mr. Hayes’ wild ride through a serial killer’s diary.
But according to Blake Harrison, PXDX’s resident FNG/soundscape maestro, the band didn’t realize what kind of beast they had on their hands until the reviews started rolling in.
“Not really, we just kinda wanted to slim everything down from Terrifyer and make a leaner, meaner metal record with a little less art,” he said.
The album is certainly meaner from John Baizley’s (of Savannah sludge horde Baroness) horrifically psychedelic artwork to Scott Hull’s scalpel riffs and skull-scraping production work.“The writing was a lot more streamlined and the sound and the songs seem a lot less arty in general,” Harrison said. “I don't know if it was a matter of restraint, but more of the idea of a leaner meaner record.”
Juggling narcogrinders Agoraphobic Nosebleed, a hush-hush fed job, working as one of metal’s most in-demand producers and a growing family, guitarist/songwriter Hull is a busy dude. That left the band little time to fuck around when they have to write and record their latest masterpiece.
“Scott pretty much came in with songs done. 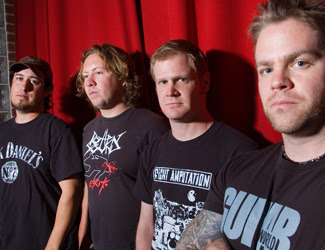 There was input from everyone else, but the skeletons were there,” Harrison said. “So it wasn't like we were jamming and staring at him to come up with a part when a song wasn't done. It also made the recording process MUCH easier.”
For those of us lucky enough to be living in smelling distance of the cesspool on the Potomac, Phantom Limb is littered with references to local spots. On J.R.’s guided tour of Northern Virginia we get to see corpses piled along the Potomac, girls in Slayer jackets hanging from McClean overpasses and the kind of rich, upwardly mobile young douchebags this area attracts like flies on shit doing their primitive mating dance along the Duke Street waterfront in Alexandria in the shadow of the notoriously congested Wilson Bridge.
“J.R. just writes what he feels,” Harrison said. “Living in the area we live in, it has an affect on him.”
Here’s hoping Hayes never invests in a good shrink. But more intriguing moving forward will be watching the Destroyers fully incorporate Harrison into their already tight little unit.
Open minded grinders probably have visions of the devastating Merzbow/Discordance Axis collaboration dancing in their heads, but Harrison said he’s still working through PXDX’s back catalogue and figuring out his role during the band’s scant live appearances.
“I do my best. Now we have a little more time to work on stuff. I'm going to be doing more of a compositional thing live, but again, we'll see how it goes.”
Posted by Andrew Childers at 1:16 PM

Y'know, I'm glad I wasn't the only one who thought that was the album of the year that year.