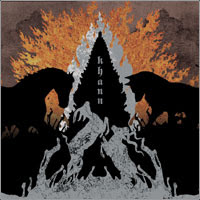 Khann
Tofutopia
Blackmarket Activities
KHAAAAAAAAANNNNNNN!
This intriguing but alternately infuriating slab o' metal is enough to send any listener into Shatnerian paroxysms.
Former Bodies in the Gears of the Apparatus vocalist Joshua Vitale returns from that band’s premature demise with Khann on debut Tofutopia.
Instead of BitGotA’s spazzy grind, these veggie heads emulate the sludge and grind smoothie of another gone-too-soon member of the metal family, Ohio’s Rune.
This Khann’s wrath throws Neurosis heft and Isis throb into a blender with crunchy Napalm Death, walking the middle course between knuckle dragging sludge and meth-ed out metal.
The grind to sludge and back slide of “Quarantined” and follow up track “Silver Mouth” show a band confident in its use of dynamics.
Clear picked notes slash through the opening of the appropriately titled “Squall,” one of the album’s clear highlights. The burly maelstrom that follows as Vitale wails “I am a powerless waste” is the album’s clear emotional peak.
But the young band does stumble occasionally as well.
Despite its stonerrific coda, overlong two part album centerpiece, “Volcanic Lungs” drags just when the album should be peaking, particularly during the 6 minute-plus first half. And closer “The Lone Hum,” a torrent of electric squeals and squonks is overlong at more than 8 minutes followed by a handful of untitled tracks with pointless noise and studio fuckery.
Tofutopia could stand to lose the soy filler. But there is a killer half an hour album buried beneath the unnecessary detours, and in the hands of a ruthless editor, this could have been one of the best releases of the year. Despite the rough edges, Khann’s debut has marked them as a band to watch.
Posted by Andrew Childers at 7:08 PM

Great album.
Can listen to it over and over again!
Joshua Vitale sounds amazing on it.
Great guitar work too!