Blast(beat) From the Past: Kill the Slave Master 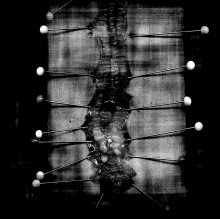 Kill the Slave Master
Kill the Slave Master
Cyberdine243
1999
Former Creation is Crucifixion guitar guerilla Karl Hlavinka continued his twisted cybernetic grind experiments with Wisconsin techgrinders Kill the Slave Master after leaving his on again, off again prior band.
Kill the Slave Master’s 11 minute self –titled EP (also known as The Artisans of Dominion: Part 1 in some parts) was a Cenobite-obsessed call to reject all of modern society, ironically brought to the you courtesy the power of modern technology.
While there’s no denying Creation is Crucifixion’s paternity, the offspring sadly did not inherit daddy’s production budget because the band’s only flaw is the EP sounds like it was recorded through a paper towel tube from another room. Which is a shame because the songs slay. “Coenobite (of the Abbatoir)’s” pinch harmonic skin lashings give way to a primativist trudge that stops and stares like a pissed cyclops bestriding the land. The “Orchestration of Sodom” very well could have scored a scene from de Sade-reinterpreted-as-Nazi-fetish flick Salo.
One thing Kill the Slave Master did, unfortunately inherit from Creation is Crucifixion is that band’s inability to keep the music going. Officially listed as on hold, the band’s deleted their MySpace page and after a decade of no new music, I think we can just assume the Cenobites finally took them away.
Posted by Andrew Childers at 6:33 PM

Shit! You have certainly pulled two hard to find releases to review, and I have them both. The "Child as Audience" is quite insane for its packaging. I've not read that much press about it. I was in the right place at the right time when I found a copy at Amoeba in Haight/Ashbury in SF years ago on business.

creation is crucifixion/kill the slave master are criminally overlooked because they're both sickly talented. glad to hear somebody else appreciates them.

The drummer from this band now plays in Fallout Boy. One of the KTSM guys does that zine Species Traitor and runs a small primitivist/green anarchy distro. Anyone have a picture of the tour shirts they did? I think the back says something like "Feral Revolution"...? I think there was also a youtube video of KTSM covering Abnegation's "Hopes of Harmony."

fallout boy? forreal? now that i didn't know. and speaking of truly odd drummer transitions, i got a doozy coming later this week in the razing arizona series.

SUCH an underrated band. Had all the best parts of the late 90's Cyberdine/Willowtip/King of Monsters bands. Rocked the Heartwork-era Carcass vocals, which a bazillion bands jacked in the coming years.

I moshed my life to pieces to this band a bunch of times in Chicago basements. Memorable shows with Kungfu Rick, Racetraitor, and the (at the time) infamous KTSM/Since By Man/ 18 Visions tour...some of the earliest spottings of eyeliner in the pit.

One of the dudes who played guitar opposite Karl Hlavinka went a little nuts with the luddite thing and went off the grid completely...they called him Survivorman, and I want to say he lived in an actual treehouse out in the f'n woods. Anytime they wanted to pratice they had to send someone out to the woods to get him.

Lastly, Karl was responsible for one of my favorite H.C./metal memories: back when Racetraitor played Columbus fest in either '98 or '99, he and some of those dudes were sitting outside the venue when the Locust pulled up and started unloading their gear. All of a sudden you hear someone scream "FUCK YOU, ROD STEWART HAIR", and Justin Pearson just stared at the ground, defeated.

Thanks mate... just dropped by. Will look for BIKE STN when we get to Seattle. Still in Buenos Airies.

Great write-up, I am a big believer in placing comments on websites to help the blog writers know that theya��ve added something of great benefit to the world wide web!

Hello, i think that this post is very good, i would like to read more about it

Species Traitor is done by Kevin Tucker of Peregrine.

recorded for free as a friends first project at school. the band, at the time of recording, wasn't taking it too seriously other than trying to get something recorded DIY as a group of friends (more of as a demo).

Rod Stewart story is legit but Pearson was standing outside of an emergency exit with Chris/left for dead. put on your leopard spandex.

side note: none of CIC's recordings had decent budgets or engineers capable of capturing metal properly.

Great EP, great post, I'm jamming this disc right now actually and have the Racetraitor split with Burn It Down ready to go next,,,

who was lead singer. He was soo hot.