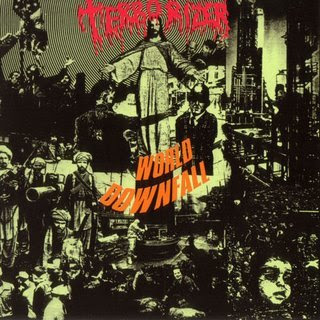 Terrorizer
World Downfall
Earache
1989
Almost overshadowed by the various members’ subsequent bands, Terrorizer’s World Downfall, recorded posthumously, is a roaring, blasting furnace of punk-infused grind.
No experimentation like labelmates Brutal Truth, and tighter than the first two incarnations of guitarist Jesse Pintado’s future partners in grind, Napalm Death. Instead World Downfall is a 36-minute whiplash ride from the moment you hit play. Pete Sandoval’s relentless drumming would later earn him a spot on the throne for deathsters Morbid Angel.
Coming from the racially charged cauldron of L.A. – which would explode just three years later – Terrorizer raged against all that was wrong with the world with short jabs of vicious metal and punk.
World Downfall’s DNA is found in a legion of younger bands playing straight ahead, ferocious grindcore. Lesser bands have spent careers endlessly aping Terrorizer’s sound, but very few can rival the original.
Culturally, the three-fourths Hispanic collective was also an important step in shattering the white boys’ club that had been metal to that point, introducing a powerful new voice and experience into the mix.The dead did indeed rise in 2006, this time with Resistant Culture’s Tony Rezhawk at the mic, but the band had lost a step or two in the intervening 17 years and Darker Days Ahead just lacked that verve that propelled World Downfall. Unfortunately, Pintado died only weeks after the album was released, but his work with Napalm Death as well as World Downfall has secured his place in grindcore Valhalla
Posted by Andrew Childers at 9:48 AM

Hello, i would like to read more about this topic.

It is a fantastic record and an even better band, excellent review.