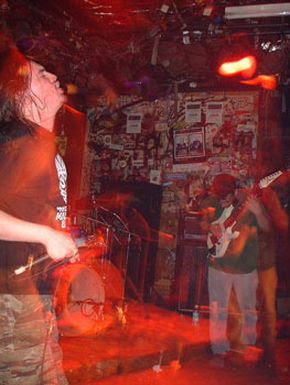 For a while we thought grind had its very own Chinese Democracy in Amber Gray, the difference being we’re pretty sure GridLink’s debut wouldn’t, you know, blow dead goats for quarters.
But grindcore’s resident otaku (and we mean that in nicest possible way) and emoticon enthusiast, Jon Chang, assures us GridLink is alive and well and only months away from dropping its debut, one of the most anticipated albums of the year.
“Art is the only thing left to finish,” the former Discordance Axis frontman assures us, but beyond that, he’s keeping the project under wraps.
After seven year musical hiatus following his former band’s colossal The Inalienable Dreamless, Chang is about to tear our eardrums a new one with 11 tracks of twitchy, scattered, Japanese inflected sonic goodness.
Chang et al managed to invoke the musical equivalent of comic book convention in downtown Akihabara with Discordance Axis. But Amber Gray, tentatively scheduled for an April or May release via Hydra Head is not merely DA 2.0. Teaming up with ex-Mortalized guitarist Takafumi Matsubara, Chang has crafted a new approach, fusing his trademark vocals with longer, thrashier songs, giving him larger palette to work with.
“Songs have a very Matsubara sound, which is very technical metal influenced,” Chang said. “Art is very different than DA as are the lyrics. There is commonality, but I already wrote those songs. Now I am writing new ones. :)”
One of the delays has been coordinating trans-Pacific recording schedules and closing GridLink’s revolving band member door.
“Matsu flew [to New Jersey] to record. [Drummer] Bryan [Fajardo, Noisear/Kill the Client/ Phobia] flew to NJ as well,” Chang said. “We actually finished mixing over 3 months ago. We're still finishing the art and we've also had Hayaino Daisuki coming out as well (Matsu and me in a thrash band).”
Aside from “Naked Pieces Scattered” on Discordance Axis’ Our Last Day CD and Amber Gray’s title track on the band’s website, the fanboys and –girls have had little to tide them over in the intervening years. Part of that was due shakeups within the band.
“Terada [drums] was unable to focus on GridLink so he bowed out of the recording. Okada [bass] also experienced a similar situation,” Chang said.
Now with a steady lineup, skinsman Fajardo wants to let the music do the talking.
“All I can say is that this release will have no shortage of blistering blast beats,” Fajardo said.
For liner note nerds, one of the joys of Discordance Axis albums was the wealth of explanatory notes, offering a peek inside his influences from film, animation and literature. But until Amber Gray actually hits a turntable near you, he’s keeping his direct lyrical inspirations a closely guarded secret.
“Those will be revealed in time. :),” he said.
However, he did have a few suggestions culled from his personal library for those determined to wring the most out of the new album.“I've been reading Neal Asher [author of Gridlinked] a lot lately,” he said. “In terms of anime I've been enjoying Welcome to the NHK and The Melancholy of Haruhi Suzumiya. They are wacky but there hasn't been much in the way of good sf anime IMHO. Flag is ok. The new Votoms series was a piece of crap.” 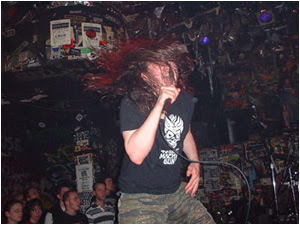 Being the consummate cartoon connoisseur, it seems a natural Chang, who ran Studio Grey – part of Echelon Software – would try his hand at animation. However, his project, Scratch Trigger Era, a hyperkinetic, cell shaded romp through the neon drenched prism of Japan’s gnat-like attention span has been, well, scratched for the time being.
“We're temporarily holding on that while we focus on our game development,” Chang said.
That and dropping an obvious contender for best grind album of the year.
“I hope it lives up to your expectations. ^_^” Chang said.
Posted by Andrew Childers at 9:54 AM

the new Gridlink material will make me cry in happiness.