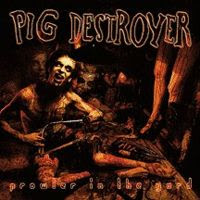 8. Pig Destroyer
Prowler in the Yard
Relapse
2001
“Semen tastes like gunmetal, she said, smiling…”
From the opening line of “Cheerleader Corpses” you knew you were in for something supremely fucked up.
Scott Hull rears his ugly riffs on the list once again, one of only two guitarists to score multiple honors on the countdown (that’s called foreshadowing, boys and girls). Unquestionably grind’s premier auteur, Hull shreds and fumes his way through 22 tracks of perverse beauty on the band’s second full length and first for Relapse Records.
Where Hull’s blipcore grind underlies social decay with Agoraphobic Nosebleed, in Pig Destroyer the searing riffs cradle frontman JR Hayes’ jaundiced look on his own psyche. Nosebleed chronicles society’s greater collapse, PXDX pull in for the extreme close up, documenting one man’s eroding soul.
This album was a tough call because latest slayer Phantom Limb could have just as easily filled this space, but it was Prowler’s psychotic scrawl, a loose concept album about a failed relationship from the viewpoint of a stalker, that left the band’s initial mark on grind.
Prowler is still the only album that has ever disturbed me, and that has nothing to do with tattooist Paul Booth’s demented artwork.
Many eons ago, a friend and I went to a show at Jaxx in Northern Virginia. He was interested in some Atlanta band named Mastodon, touring on their first EP (Hey, whatever happened to them?). I was there for Pig Destroyer because I heard Hull was involved. After a blistering 30 minute set, I immediately set out to find the band’s album, a ravaged, diseased platter that made me physically queasy once I sat down to read the lyrics. That’s a milestone not even the mighty Carcass can claim.
I tucked it away in the back of my CD collection for a couple of days, but like that first viewing of Ichi the Killer or Audition, I couldn’t shake its greasy allure.
And that, folks, is the hallmark of art.
Posted by Andrew Childers at 7:25 PM

Agreed in your review. I think the "Prowler" record was a defining moment that PD had to create in order to set their standard. The overall content of the record down to the artwork garnered the band the credibility to set themselves apart from other "like minded" bands to what the band has become today. I was involved a little bit with that record, so I can see how it has been rendered somewhat of a genre defining classic.