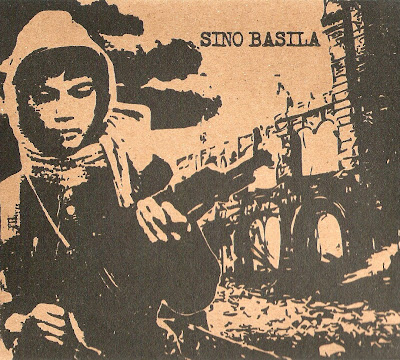 Sino Basila
Sino Basila
Black Box Recordings
Mike Hill is the Justin Broadrick of second gen noise rock.
Hill’s name many not carry the cultural currency of Remix Master J’s, but follow me here.
Both men took the foundation of what had gone before (Broadrick’s Swans obsession, Hill’s obvious familiarity with Unsane, Helmet and the AmRep catalogue) to make staggering, uncompromising music that was scathing in its social and emotional impact. Godflesh set the bruising tone for what would become industrial and experimental music while Hill scraped some of the most abrasive music of this early century out of the grime and rhythms of his native NYC in the truly ferocious Anodyne (co-conspirators Joshua Scott and Joel Stallings are currently getting their grind on in Defeatist).
Both guys also got all contemplative later in life, the godly Mr. ‘Flesh cranking out divine ambient drone in Jesu while Hill teamed up with former Lickgoldensky six string strangler Jamie Getz to channel their inner Robert Smith in Versoma.
But here’s where the comparison breaks down. While Broadrick has settled into a pastoral Green Acres existence in rural England, Hill quickly relapsed into newer and more scathing musical outlets. While Hill’s latest project, Tombs, has been getting tons of press and praise, let’s not overlook Sino Basila in the rush to crown the newest Anodyne
The third release from Hill’s own Black Box Recordings, Sino Basila presents two tracks of gargantuan, ponderous instrumental sludge stretching out over 25 tar pitted minutes.
Though Hill’s catalogue of AmRep releases is surely near and dear to his heart, first track, “Draconian,” shows the man didn’t miss out on those limited edition Melvin’s 7”s while he was at it. The 18-minute thud and drone of “The Iron Ghetto of Man” could easily sit along side Khanate’s first go-round or anything from the Grief catalogue in your record collection.
While the man of the million muses has already moved on to Tombs, it’s well worth picking up this hand-numbered, limited to 100 release.
Posted by Andrew Childers at 9:59 PM